Clothing Manufacturers Use 3-D Images to Speed Up Production

Update Required To play the media you will need to either update your browser to a recent version or update your Flash plugin.
By Phil Dierking
29 July, 2018


When Betabrand recognized that knitwear was becoming a popular look in running shoes, the company asked users of its website what kinds of footwear they liked.

Using their answers, the clothing manufacturer had its version of the shoe available on the website in just one week.

What the users saw was a three dimensional (3-D) picture of the running shoe. The image had height, width and depth. Yet no such footwear existed yet.

Normally, it would take six to nine months to create a traditional prototype, or model, of the shoe. By waiting so long, the company might have missed out on the interest in the knitwear.

"The web attention span is short," noted Chris Lindland, chief executive officer (CEO) of Betabrand. "So if you can develop and create in a short time, you can be a real product-development machine."

Buyers still needed to wait a few months for the real shoe to be manufactured. Yet the use of digital technology in designing and selling means new fashion products are getting to people faster than under the old system. 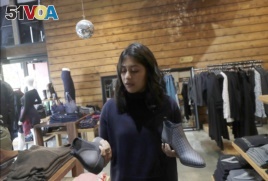 In this Feb. 15, 2018 photo, Ayesha Tellis holds up shoes she designed on her computer at a Betabrand store in San Francisco.

Companies and store owners who welcome this technology are going to be "the winners of the future," said David Bassuk, managing director of AlixPartners, a marketing advisory service.

Cutting the time in half

The use of 3-D imaging is a big cultural change for clothing makers. For years, designers created images on paper, a design got approved, and then images went to a factory that created prototypes. Designers and developers made changes and sent prototypes back and forth. Once a final version was approved, it was sent to the factory to be copied for mass production. From start to finish, the process could take as long as a year.

Now, some companies have designers creating images on high-resolution computer tablets. They use software programs that can email 3-D images of clothing with measurements immediately to factories. The goal is to reduce to six months or less the time it takes to get new products to stores.

For clothing manufacturers and stores, this change means design decisions can happen closer to when new fashions arrive at stores.

Currently, the 3-D technology is only used in just two percent of overall suppliers, says Spencer Fung, CEO of Li & Fung. But he believes that will change as stores realize that reducing design time and prototypes saves money.

"You can create an entire collection of clothes before actually making one real product," noted Whitney Cathcart, CEO of the Cathcart Technologies. She said this "reduces waste, it reduces lead times, it allows decision-making in real time, so the entire process becomes more efficient."

Fung said he imagines a situation where a social media image with a famous person wearing a red dress gets 500,000 "likes." A message goes to a clothing manufacturer that the dress is trending. Within hours, a digital version of a similar product is on the company's website. A factory can start to produce the dress in days.

Nicki Rector lives in Northern California. Last year, she bought a pair of Betabrand's boots based on the 3-D image.

"It looked real," said Rector. She did not worry about buying from a digital image, she said, because in online purchases, you cannot really know whether you bought the right product until you put it on your feet.

Few companies are yet selling directly to buyers off digital images like Betabrand. They are instead showing the images to store buyers or factories.

Xcel Brands, which owns several clothing companies, uses them for their women's clothes, as well as for the Judith Ripka jewelry company. Xcel's chief, Robert D'Loren, hopes to start putting 3-D images on its website next year.

Tommy Hilfiger uses a touchscreen table where buyers can see every product in the collection and create special orders. And Deckers Brands is using digital images of its boot in 10 colors, removing the need for 10 prototypes for store buyers. That helps reduce cost and increases speed.

Using digital designs also means that companies like Levi Strauss & Company can put information into a machine that can change the color or look of their products. This can shorten a 30-minute-long process, done by hand, to as quickly as a minute and a half.

Bart Sights, who works for Levi's, said that 30 years ago the company's jeans were only available in three colors. Now, the company can design 1,000 finishes each season.

Anne D'innocenzio reported this story for the Associated Press. Phil Dierking adapted her story for VOA Learning English. George Grow was the editor.

Would you feel comfortable buying pants from a digital image? Write to us in the Comments Section or on 51VOA.COM.

boot - n. a covering usually of leather or rubber for the entire foot and the lower part of the leg

digital - n. showing the time with numbers instead of with hour and minute hands

trending - adj. when a topic is the subject of many posts on a social media website within a short period of time.

tablet - n. a flat, rectangular computing device that is used for connecting to the Internet, watching videos, reading books, etc.

span - v. to continue throughout (a period of time)