It remains unclear what caused a whale-watch boat to sink last weekend, killing five Britons off the west coast of Canada.

The boat sank Sunday near Tofino, British Columbia, with 27 people on board. The accident sparked a rescue effort by the Canadian military, Coast Guard, and local fishermen. 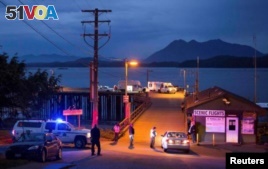 The Joint Rescue Coordination Centre said 21 people were rescued and one Australian was missing. Most of those rescued were taken to hospitals. A spokeswoman for Island Health said one person was in serious condition, but stable.

The boat, or cruiser, was called Leviathan II. It was 65 feet long and had three decks. It was owned by Jamie's Whaling Station and Adventure Centres.

Corene Inouye is the company's spokesperson. She told the Guardian newspaper that the Leviathan II had been operating normally on a route it had followed for the past 20 years.

She could not say what caused the boat to sink. It happened so fast that the crew members were unable to radio for help, she said.

In 1998, a boat operated by the same company sank near Tofino, Reuters said. The ship's captain and a German tourist died in that accident.

The company owner, Jamie Bray, said he is cooperating with investigators to figure out what happened.

After the Leviathan II sank, survivors and bodies were brought ashore to Tofino. It is a Canadian town of about 2,000 people. Tourists from around the world visit the town, hoping to see humpback and Pacific Gray whales.

Do you have an opinion about this story? Let us know what you think in the Comments Section below, or on 51VOA.COM.

This article was reported by VOANews.com. Mary Gotschall adapted this story for Learning English. Kathleen Struck was the editor.

whale - n. an often very large mammal that lives in the ocean

on board – expression. carried on a vehicle or on a boat, in this case

sparked – v. to cause to start or happen

spokeswoman – n. a woman who speaks for or represents someone or something

cruiser – n. a boat that has room to live on and that is used for pleasure

tourists – n. people who travel to a place for pleasure