Update Required To play the media you will need to either update your browser to a recent version or update your Flash plugin.
By Caty Weaver
13 April, 2016 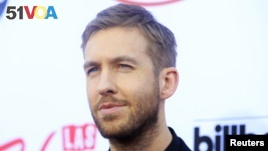 LCD Soundsystem broke up in 2011. But last year, the group released a single. The band's reunion was announced soon after. Now they are on tour, including appearances at several music fests.

The band has won three Grammy awards, including one in 2006 for the song "Daft Punk Is Playing at My House." Daft Punk is another popular electronic band.

Guns ‘n' Roses has been around since 1985 and won huge success early on. Band members have come and gone and come again.

The song "Sweet Child O' Mine" was the group's only song to go to No. 1 on Billboard magazine's "Hot 100" list of popular songs.

Lead singer Axl Rose wrote it for his love interest at the time. Some of the band members did not like the song at first. But it helped Guns ‘n' Roses cross over to non-rock radio play. It also helped sell 30 million copies of the group's first album "Appetite for Destruction."

Calvin Harris has played Coachella before. But this is his first headline appearance. It is also the first time a DJ has starred at the festival. It is not a surprising choice for Coachella organizers, however. In 2014, Harris reportedly attracted the second-largest crowd ever at the event.

This year maybe he will break the record. It would not hurt if his girlfriend attends the festival. She happens to be America's top earning performer, Taylor Swift. Harris and Swift just celebrated their first year anniversary last month.

Coachella takes place in the desert town of Indio, California. It runs through April 24.

Have you been to a big music festival? Tell us about it in the Comments Section or on 51VOA.COM.

tour – n. a series of related performances, appearances, competitions, etc., that occur at different places over a period of time