Update Required To play the media you will need to either update your browser to a recent version or update your Flash plugin.
By Frank Beardsley & Kelly Jean Kelly
26 November, 2014

Grant noted that, in the past, the separate Union armies had moved and fought independently. He said they were like a poorly trained team of horses. No two of them ever pulled at the same time in the same direction. 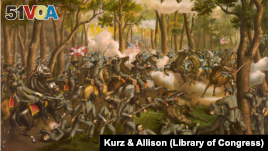 "Battle of the Wilderness" by Kurz & Allison (Library of Congress)

Under his command, Grant said, the Union armies would pull together -- they would all attack at the same time. The main target, once again, was the Confederate capital at Richmond, Virginia.

Grant's Overland Campaign began in May 1864. One of the first battles was about halfway between Richmond and Washington, DC.

The Union Army of the Potomac and Confederate Army of Northern Virginia clashed in a wooded area west of Fredericksburg, Virginia.?

The battle quickly became a blind struggle. The woods were thick. The smoke was heavy. The soldiers could not see each other until they were very close. Shells set the trees on fire. The wounded could not escape the flames. Their screams filled the air.

After two days, General Grant decided that the wilderness was not the place to fight the Confederate force under General Robert E. Lee. Grant wanted to fight in the open, where he could use his artillery. So he marched his men toward a place called Spotsylvania Court House.

Lee moved his men as fast as Grant moved his. When the Union army reached Spotsylvania, the Confederates were waiting behind walls of earth and stone.

For several more days, the two armies fought. At times, they were so close they had no time to load and fire their guns. So they used their guns to hit each other.

The Confederate line bent. But it never broke. Once again, Lee had stopped the Union army.

Grant refused to accept defeat. He said he would fight to the finish, if it took all summer. Once again, he ordered his men to march around the end of Lee's line. Lee quickly pulled his men back to a place called Cold Harbor, not far from Richmond.

While the Union army marched and then rested, Confederate troops built a complex system of trenches. By the time the Union army was prepared to attack, Lee's men were ready behind these defenses.

As he had done in the wilderness and at Spotsylvania, Grant ordered his men to attack hard. But Lee's soldiers, protected by their trenches, slaughtered the Union forces. In less than an hour, 7,000 Union soldiers fell dead or wounded.

Grant finally stopped the attack. The Union soldiers returned to their lines. They left behind hundreds of wounded men.

For four days, the wounded lay on the battlefield crying for help, for water. Men who tried to rescue them were shot down. Finally, Grant and Lee agreed on a ceasefire to care for the wounded.

But the ceasefire came too late for most. They had died. In the end, nearly 13,000 Union troops were killed, missing, or wounded at Cold Harbor. The South suffered only about 4,500 casualties.

The battle at Cold Harbor was General Lee's last major victory in the Civil War. It also showed how the war had changed. Taking a strong defensive position, as Lee had done, had proved more important than launching a powerful attack.

Still, General Grant was resolved to defeat the Confederate forces and take their capital. He planned his next moves.

And I'm Christopher Cruise. This is The Making of a Nation from VOA Learning English.

trenches – n. deep, narrow holes dug in the ground; a hole that is used as protection for soldiers

slaughtered – v. killed many people in a violent way

ceasefire – n. a halt in fighting, usually by agreement

proved – v. turned out to be