Update Required To play the media you will need to either update your browser to a recent version or update your Flash plugin.
By Pete Musto
27 January, 2018


International students can face many kinds of barriers in applying for admission to colleges and universities in the United States.

These can include high costs and extreme distance from family and friends.

A difficulty most students from non-English speaking countries face in the U.S. is a language barrier.

Many such students feel they have little or no chance of gaining admission to an American school because of their poor English skills. But what if that barrier was removed from the application process?

Rob Hardin says this is the goal of a special path to American higher education called conditional admission. Hardin is the assistant director for international student recruitment at the University of Oregon in Eugene, Oregon. 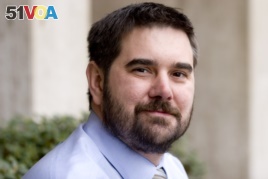 He says most colleges and universities in the U.S. want international students on their campuses.

He adds that many U.S. schools now accept the fact that some of the best students in the world do not speak perfect English. So, over the last ten years, more and more schools have begun using conditional admission as a way of helping these students.

The way it works at the University of Oregon is very simple, Hardin says. International students apply in the same way any other student would. They provide records of their grades, information about their activities outside of school, and other application materials. They also must provide proof of their scores on an English language ability test such as the TOEFL.

Hardin notes that many American colleges and universities only accept applicants whose TOEFL score reaches a certain level. But conditional admission permits students to ask for special consideration. Those schools then look at all the other materials these applicants have provided. Then the schools decide whether an applicant would be a good fit with some more English education.

If the University of Oregon approves a student for conditional admission, he or she is placed in a special English-language education program, Hardin says. First, the university tests the students to identify which of seven instructional levels they should enter. Then, they begin English classes taught by university professors. 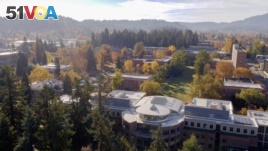 The University of Oregon in Eugene, Oregon during the fall, as seen from above.

Hardin says many international students prefer to study English in their native countries. It is usually more economical, for one. And it means less time away from their homes and families.

He also argues that these conditional admissions programs offer more than a traditional language school can. He says they help international students get used to the American college experience before they start their degree program. Also, students often grow their language skills much faster while living at an American college and using its resources.

"You're going to have to figure out how to go to the grocery store and buy apples," said Hardin. "You're going to take what you're learning in the classroom and you're going to be able to immediately apply it to your daily life."

Hardin adds that this kind of non-traditional path to admission is not just for students with extremely weak English language skills. He says even generally strong non-native speakers can lack the level of English skill needed for success at an American college.

For students whose TOEFL scores are still not high enough for traditional admission, some schools offer what is called a bridge program. At the University of Oregon, students in the bridge program must take as many as six special English classes in addition to the ones for their degree program.

Again, students take a test at the start of their studies to determine how many of the bridge program classes they need. The classes are meant to provide a little extra language support, and they often relate to the general subject classes students are already taking.

At the University of Oregon, Hardin adds, international students must complete their bridge program classes within their first year.

Hardin says that both bridge programs and conditional admission are designed to make American higher education more inclusive. And they provide a path for students that they otherwise might not have known was available to them. 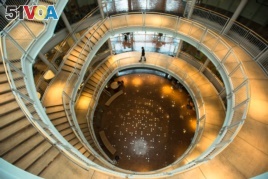 A student walks down the main stairway in the Lillis Business Complex at the University of Oregon.

But he also notes that international students should not expect every college and university in the U.S. to offer such programs. This is especially true of the top schools that get the most attention worldwide. At those institutions, competition is fierce and students who are already strong in English have a better chance at acceptance.

"Places ... that receive such a high number of applications ... want to admit students who are, frequently, going to have perfect grades, perfect SAT scores," Hardin said. "And I don't think they're interested in teaching English. It's not really what they've ever done. And a lot of ... these institutions ... do not have a shortage of applications."

So, he adds, a student who is worried about their language abilities may want to consider one of the hundreds of lesser-known schools. Asking one of those schools if they offer conditional admission or a bridge program might be what makes their dreams of American higher education come true.

Pete Musto reported this story for VOA Learning English. Caty Weaver was the editor. We want to hear from you. Do colleges and universities in your country offer non-traditional admissions programs? How do these programs work? Write to us in the Comments Section or on 51VOA.COM.

apply(ing) – v. to ask formally for something, such as a job, admission to a school, or a loan, usually in writing

conditional – adj. used to describe something, such as an agreement, that will happen only if something else also happens

recruitment – n. the activity of finding people that have the right qualities and getting them to attend a school or join a company, an organization, or the armed forces

enhance(s) – v. to increase or improve something

grade(s) – n. a number or letter that indicates how a student performed in a class or on a test

determine – v. to officially decide something especially because of evidence or facts