Colleges Admissions: Finishing as Strongly as You Start

Update Required To play the media you will need to either update your browser to a recent version or update your Flash plugin.
By Pete Musto
05 May, 2018


Applying for admission to a college or university in the United States can be a long and difficult process.

Each step requires hard work and careful consideration. Even after applicants submit all the required materials to their schools of interest, there is still much to do.

Hebe Fuller says what comes next depends greatly on the first steps the applicants took. Fuller is the director of international admissions at Elon University, a private liberal arts university in Elon, North Carolina. She spoke to VOA about different ways to seek admission to U.S. schools. Most high school students in the U.S. apply to college in the first half or fall of their last year of high school. Fuller said most students should apply to several colleges and universities. But if an applicant knows exactly which school they want to attend, he or she should consider requesting early decision.

Schools that offer early decision expect students to complete and submit their applications several months before the regular deadline. The schools also make their decisions about those candidates early.

But, Fuller noted, early decision candidates must understand they have entered a binding agreement to attend the school if accepted.

Early action is a little different. Students also submit their applications earlier and schools answer earlier. But, the student is not bound to to attend the school if accepted.

So, why do early decision or early action? Fuller said boths path will improve the chance of acceptance.

"We like to offer admissions to students that will accept our offer," she told VOA. "So those that apply early decision ... have the highest level of acceptance. ... Early action, we understand that students are applying to multiple schools, but they are also demonstrating more interest. ... So, we don't necessarily pay more attention, but we recognize that they are considering us."

Fuller also said that some schools will still consider students for regular decision even if they were rejected from early decision or action. 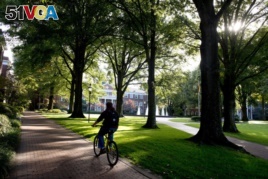 A student rides a bicycle across campus at Elon University in Elon, North Carolina.

Most American universities inform regular decision candidates of acceptance or rejection in the spring. Then, Fuller said, accepted students must pay a deposit to the school they most want to attend.

The deposit amounts to a small percentage of the cost of the first year of study at the university or college.

Fuller said even at this point some students still may not be sure about which school they want to attend. Most schools that offer admission give applicants several months to decide to accept or not. So, Fuller suggests applicants visit or re-visit the schools to help them decide.

Students and their families can also use this time to do more research on the schools, Fuller suggested. They can learn about the community in which the students would live and about the environment. They can also consider how much financial aid each school is offering.

However, Fuller said students should not take too long to make their decision. Students who provide deposits might be put on the list for housing at some schools. The earlier the deposit, the higher on the list and, possibly, the better the housing choices.

Fuller said the university's housing department will ask students who plan to live on campus for information about their personalities. This will help department officials decide which students live together.

Students who will not live on campus should use this time to research other housing in the area, Fuller advised. 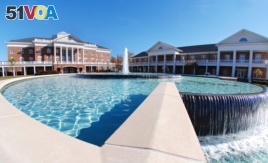 One of the fountains on the campus at Elon University in Elon, North Carolina.

Fuller said the next major step on the path to college is the process of "orientation."

Orientation is a series of informational events for new students. It starts about a week before classes open.

Sometimes a college or university will not accept or reject an applicant. Instead, closely competitive candidates will be placed a ‘wait list.'

This is a safety measure for schools. They know that some applicants to whom they offer admission will decline it. So, the school will offer that admission space to a student on the wait list.

"When we're looking at ... the wait list, we're not necessarily looking at who's number one, two or three," Fuller explained. "It's more of, ‘What kind of student will complement the class that we're trying to form?'" 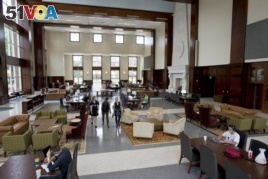 Students pass through one of the buildings on campus at Elon University in Elon, North Carolina.

When it comes to facing total rejection by a given school, Fuller urges to students to remember that things do not always go as they expect. That is why they planned ahead and made sure to apply to several schools and keep their choices open.

"I always try to tell them to picture themselves four years from now," she said. "Wherever they end up, it's pretty much guaranteed that they will have had a great experience. They will look back and say this was the right choice."

Pete Musto reported this story for VOA Learning English. Caty Weaver was the editor. We want to hear from you. What other steps do you think are important for students to consider once they learn they have been accepted by one or more schools? Write to us in the Comments Section or on 51VOA.COM.

apply(ing) – v. to ask formally for something, such as a job, admission to a school, or a loan, usually in writing

deadline – n. a date or time when something must be finished

binding – adj. forcing or requiring someone to do something because of a promise or agreement

multiple – adj. more than one

deposit – n. money that you give someone when you agree to buy something

personalities – n. the sets of emotional qualities, or ways of behaving that make people different from one another

complement – v. to complete something else or make it better