Update Required To play the media you will need to either update your browser to a recent version or update your Flash plugin.
By Pete Musto
03 March, 2018


For many would-be college students, testing is the most difficult part of the undergraduate application process.

Applicants sit for hours taking tests. They answer questions about a number of subjects, sometimes providing answers both in writing and by saying them out loud.

In some countries, a single test result can be the only thing college or university officials consider when deciding whether or not to admit a student.

But that is not true everywhere. Ryan Griffin says that in the United States, test scores are only part of what school officials consider.

Griffin is head of International Admissions at the University of Missouri, a public research university in Columbia, Missouri. He notes that many schools have changed their thinking about this part of the application. 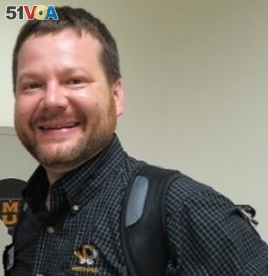 Ryan Griffen, director of international admission at the University of Missouri.

Griffin says a growing number of U.S. colleges and universities let applicants choose whether or not they want to take a standardized test, such as the SAT or ACT. He told VOA the University of Missouri does not require international applicants to provide results from either test.

Why? The College Board, a higher education group, created the SAT in 1926 as way of fairly measuring a student's academic abilities and critical thinking skills. A university professor created the ACT in 1959 so as to offer a different method for rating college applicants. But Griffin says research has since shown the two tests are not as fair as was once thought, especially for students in need of financial help.

Colleges and universities have come to recognize that tests like the SAT and the ACT usually help students with experience in the U.S. education system. Additionally, official testing centers are available in some, but not all areas. They can be difficult to reach and costly for some applicants.

Still, Griffin says, if a student decides to apply to a school that does require a standardized test score, there is a lot to consider. Both the SAT and the ACT are divided into different parts.

Both tests have areas that measure a student's abilities in mathematics, where they must choose the best answer to a question.

Standardized tests also require students to demonstrate their ability to understand a reading and express themselves in writing. But unlike the SAT, the ACT has a part with questions about science.

Schools usually prefer one standardized test over the other and will clearly state which of the two they want applicants to take, says Griffin. The different parts of both tests have their own test scores. And he thinks that students should consider taking either test more than once.

"There's going to be some anxiety as far as sitting down for this test for the first time," Griffin told VOA. "So it can be a good chance for the student ... to feel as though they then have a better understanding ... for their second attempt."

Most Americans take the SAT or ACT in the spring of their next to last year in high school. If students decide to re-take the test, Griffin suggests doing so in the autumn of their final year.

Some colleges will only accept a student's most recent test score. But another reason he says students should take either one more than once is that some schools will accept the highest score from both attempts. And if, for example, a student scores higher in math the first time they take the SAT, but higher in writing the second time, some schools will combine the higher numbers. Students can often ask schools how they weigh these scores, or read about their methods on the schools' websites. 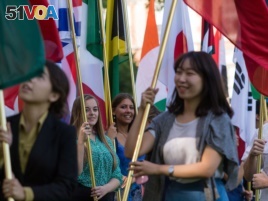 International students carry their national flags at the University of Missouri in Columbia, Missouri.

There are many test preparation books and classes available to people interested in paying for them. But Griffin says the best test preparation is to be well-rested the night before and calm the day of the test.

"It's ... important for students ... to be confident in their knowledge, so that when they sit down to take the test there's not an extra level of ... pressure that they're putting on themselves," he said.

However, academic tests are not the only ones students from non-English speaking countries will face. After World War II, U.S. schools needed a way of measuring the language abilities of the greatly increasing number of international students entering the country. So a test of English as a foreign language -- the TOEFL -- was created in 1964.

Another test for non-native English speakers -- the IELTS -- was created in 1980. The IELTS is mainly for use by English-speaking European colleges and universities. But Mark Algren says it is becoming more widely used in the United States. Algren is the executive director of the Center for English Language Learning at the University of Missouri.

Algren notes that like the SAT and ACT, the TOEFL and IELTS are similar, and schools usually prefer one over the other. They also both have individually scored parts. These measure a student's abilities in listening, speaking, reading and writing in English.

Like the academic tests, he says, there are many resources available to help applicants prepare themselves. But one of the best things any language learner can do is to take seriously the English language classes their school offers.

Outside of school, the best thing a student can do is read in English, notes Algren. All areas of language ability are important. But in a college environment, reading is the most commonly used language skill. And reading connects to the second most commonly used skill: writing.

Unlike traditional standardized tests, Algren suggests students not take the TOEFL or IELTS more than once. Test results are considered acceptable for up to two years, and many schools, such as Missouri, only accept the most recent score.

Instead, Algren says, students should make use of internet-based practice tests. These will help student get used to the amount of time they have to complete these tests, and let them know where their strengths and weaknesses lie.

"Be truthful with yourself, because you do ... get some idea of things you need to be working on," he added.

Both Algren and Griffin agree that honesty is important, especially in testing. Schools have ways of looking at test scores to see if there is anything unusual about them that suggests a student cheated.

Also, in the case of language testing, many U.S. schools require international students to take an additional English ability test when they arrive. This to ensure that students are fully prepared to begin their studies.

We want to hear from you. How do you prepare for tests? What advice can you offer to other students who are considering taking the SAT, ACT, TOEFL or IELTS? Write to us in the Comments Section or on 51VOA.COM.

undergraduate – adj. describing a student at a college or university who has not yet earned a degree

application – n. a formal and usually written request for something, such as a job, admission to a school, or a loan

standardized test – n. any form of test that requires all test takers to answer the same questions, or a selection of questions from common bank of questions, in the same way, and that is scored in a consistent manner

practice – adj. describing the activity of doing something again and again in order to become better at it