Update Required To play the media you will need to either update your browser to a recent version or update your Flash plugin.
By Christopher Jones-Cruise
14 June, 2016


The non-profit company that gives the ACT college entrance exam canceled plans to give the test last Saturday in South Korea and Hong Kong.

Spokesman Edward Colby said the company canceled the exams on Friday for about 5,500 people at 56 test centers. It did this, he said, after the company received evidence that test materials had been stolen. He said he believes it is the first time that the exam has been cancelled for an entire country.

"We are extremely concerned about any activities that could (have an effect on) the fairness and integrity of the test," he said. "When individuals attempt to profit by stealing test materials and selling them, it can hurt thousands of students who did nothing wrong, as it has in this case."

Colby did not discuss how or where the test information was stolen. 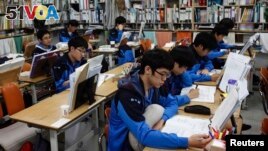 The students whose tests were cancelled will have their test fees returned, Colby said. However, the test will not be given again until September.

In 2013, the College Board, the company that gives the Scholastic Aptitude Test, or SAT, cancelled testing for all students in South Korea. In that case, the College Board also said its testing materials were stolen.

The ACT college entrance test competes with the SAT.