Update Required To play the media you will need to either update your browser to a recent version or update your Flash plugin.
By Jonathan Evans
07 January, 2019


People who love sports often go to great lengths to show their support for their favorite sports team.

Over the past two weeks, four Americans took their team loyalty to new heights. As part of a competition, they agreed to live high in the air next to a billboard overlooking the city of San Jose, California.

The four fans represented the four schools competing for the championship of American college football. The fans agreed to live on the nearly 14-meter- high sign for as long as their favorite team kept playing. 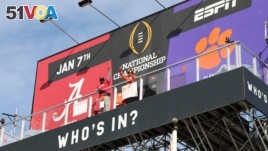 Clemson Tigers fan Nancy Volland and Alabama Crimson Tide supporter Llyas Ross Sr., who have been living on ESPN Billboard ahead of Monday's national championship game as part of an ESPN contest since December 26, 2018, are seen in this photo taken downto

The sports broadcaster ESPN provided each person with a sleeping bag and a small tent to protect them from rain and cold weather.

The fans passed time on the billboard by taking part in games in which they could win money and other prizes.

As of Monday morning, only two of the four were still up on the billboard. They are Nancy Volland, of Mount Dora, Florida, and Llyas Ross, Sr., from Tuscaloosa, Alabama.

Volland is a 59-year-old married mother of two daughters. She told the Reuters news agency that her time on the sign had gone by quickly. But she admitted it came with some difficulties.

She has to walk down 72 steps to use a restroom. In the middle of the night, "going down those 72 stairs and back up is the hardest part," she added.

Volland attended Clemson University in 1977. She likes the school so much that she had one requirement for her now-husband before agreeing to marry him. He had to promise that she got to attend three Tigers home football games a year.

Ross, age 39, has been deployed to Iraq three times for the U.S. Army. He told Reuters that living on the billboard for about two weeks is just the latest example of his loyalty to Alabama.

One time in Iraq, Ross awoke in the middle of the night to put on Alabama clothing and cheer for his team back home. He did this on a day when he had orders to carry out a mission hours later.

Ross counted down the minutes until January 1, 2019 on a video call with his wife and four children. He said living up on the sign had not been that difficult. But he added that he was happy it was nearing an end.

Ross said, "I am so ready to get off this billboard. Not only to see my family but before I see my family to see the national championship game because this will be the very first one I am having the opportunity to attend."

sleeping bag – n. a thick, body-length object that is used for sleeping outdoors

billboard – n. a large sign for advertisements that is next to a road or on the side of a building

mission – n. the act of doing something; duties you are required to carry out