Update Required To play the media you will need to either update your browser to a recent version or update your Flash plugin.
By Kelly Jean Kelly
03 August, 2019

The University of Illinois found that several parents officially gave up responsibility of their children. The move enabled the children to receive financial aid to pay for a college education. But that money is meant to help truly needy students. 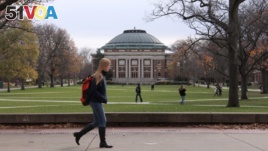 FILE - In this Nov. 20, 2015 file photo, University of Illinois students walk across the campus in Urbana, Illinois. The school has identified at least 14 cases of misleading financial aid applications. (AP Photo/David Mercer, File)

The case comes at a time of intense discussion about the fairness of college admissions. Earlier this year, U.S. officials found that some wealthy parents paid bribes to get their children into top universities.

Investigative reporters discovered the latest case last month. It was linked to a small group of parents who live outside Chicago, Illinois.

Those parents gave up legal guardianship of their children to friends and relatives. The children could then claim they were independent of their families and poorer than they really were.

As a result, the students were permitted to receive up to $11,000 a year in education grants from the government. They could also receive university scholarships. Those scholarships pay up to as much as the total cost of the education.

Some of the parents who took part in the scheme told reporters they were following the advice of a consulting business called Destination College. The company's website says it helps parents pay for college in the least costly way possible. Destination College did not choose to comment on the case at the time.

How were the parents caught?

The parents were caught when some guidance counselors at high schools near the University of Illinois heard what was happening. The counselors told the school's admissions office.

University officials soon noticed that a few applications looked very similar. The forms all came from students who lived in the same areas. They all claimed the students had recently become independent from their families. And they all used a number of the same words. In total, University of Illinois officials identified about 14 of these applications over the last year.

ProPublica, a non-profit group, found that students involved in the scheme have also been accepted at other colleges. The Associated Press says the schools include the University of Missouri, the University of Wisconsin and Indiana University. All three schools said they are investigating the issue.

Andy Borst is the director of undergraduate admissions at the University of Illinois. He says while the parents' move appears to be legal, it is probably not right.

By using money meant for poorer students, wealthier families take away financial resources for students who truly need help. For example, the Illinois state government gives aid only to the first people who apply. The children of wealthier families who took part in the scheme received some of that aid. Thousands of other students were turned away.

Financial aid is not endless, Borst said. The government cannot give money to every student who needs it.

Mark Sklarow is head of the Independent Educational Consultants Association. He says both the guardianship scheme and the bribery case from earlier in the year show the problem of college tuition: The cost of higher education keeps going up and up.

But, he said, the parents who transferred guardianship still acted unfairly.

"Guardianship laws are designed for when parents are unable or should not be responsible for a child's well-being," he said. "It isn't something that is meant to be traded away in order to beat the system."

What will happen now?

To help make sure parents do not abuse the system again, the U.S. Department of Education is being urged to change its rules. Under one proposal, students would not be considered independent if they continue receiving medical and financial support from their parents.

In addition, the University of Illinois is adding new questions to its application. For example, students who claim they are independent are now asked who pays the cost of their cellphones.

School officials have not yet decided what to do about the families who used the guardianship scheme. They may take away the university scholarships. But for now, they must continue to give government money to students who can legally claim it.

The Associated Press reported this story. Kelly Jean Kelly adapted it for Learning English. George Grow was the editor.

scheme - n. a clever and often dishonest plan to do or get something

consult - v. to give professional advice to a person, organization, or company for a fee

destination - n. a place to which a person is going or something is being sent

application - n. a formal and usually written request for something