Update Required To play the media you will need to either update your browser to a recent version or update your Flash plugin.
By John Russell
12 March 2022


For her final college project, known as a senior thesis, Harvard University student Julia Riew wrote a full-length musical that has become popular on social media.

The 22-year-old Korean American student has been releasing parts of the musical, which is inspired by a Korean folktale, on TikTok. The short videos that show her changing into a princess have quickly gotten a strong following.

Supporters have taken to creating visuals and animations to help bring her story to life. 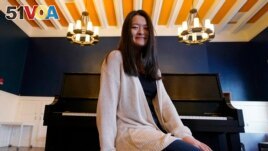 Julia Riew poses on the campus of Harvard University in Cambridge, Mass., Wednesday, Feb. 16, 2022. Riew, a Harvard senior, has been performing her songs on TikTok, drawing a huge following and getting interest from filmmakers and theater producers. (AP Photo/Charles Krupa)

Riew has even gotten attention from Hollywood and theater producers.

"It honestly still feels like I'm dreaming," she said recently. "It's been heartwarming to see the reaction, especially among the Korean American community."

Heartwarming is a term that means causing pleasant feelings or happiness.

Riew hopes the musical follows the same path of other musicals that have had success on TikTok in recent years.

"Ratatouille: The TikTok Musical" was released in 2020 as a concert for charity after the idea developed for months on the social media platform. It had Adam Lambert, Wayne Brady and other stars.

Last year, the female group known as Barlow & Bear became popular on TikTok with a song inspired by the Netflix show "Bridgerton." That led to "The Unofficial Bridgerton Musical," a 15-song album that is now up for a Grammy award.

The interest and attention that Riew has received has led her to believe that the musical may become a film or a stage production.

"It seems at this point the project will be moving forward," she said. "Not sure yet if that means as a stage production, as an indie film or something else, but there definitely has been some interest."

Riew's musical draws on the Korean folktale "The Blind Man's Daughter," about a young woman who tries to restore her blind father's sight, but ends up in the distant Dragon Kingdom.

In Riew's version, young Shimcheong spends years growing up in the magical realm before setting out on a journey home. Along the way, truths are revealed, problems are solved, and there's no shortage of laughs and fun songs.

If that sounds like many of Disney's most famous works, that's the point, says Riew, who grew up listening to Disney and Broadway songs. She began writing her own songs and musicals at a young age.

"What stood out to me is that it's a story about a young woman who goes on an adventure," she explains. "There aren't too many stories in Korean folklore about women, especially ones where they go on adventures."

Riew says she's long considered the idea of a musical drawing from her Korean heritage, but only seriously started working on it after the coronavirus pandemic hit. She ended up moving back home because campus was closed.

Riew admits she struggled at times to write the story and questioned if it was right for her, as a third-generation Korean American, to tell it.

"There were moments where I tried to quit, when I felt like I was a fake Korean," she said. "But I realized over the process that we can only really represent our own story, and that's totally okay. There's no such thing as one way to be Korean."

The TikTok videos have not just helped create attention for the project, they have also helped her develop and change it.

Riew says she changed the character of Lotus, Shimcheong's friend and the story's comic relief, from a dragon to a nine-tail fox from Korean folklore. This change was based on helpful messages from supporters.

"It's been reinvigorating," she said of putting out her work to the sometimes critical eye of social media. "It's been eye-opening to realize how many people would love to see this come to fruition."

Philip Marcelo reported on this story for the Associated Press. John Russell adapted it for Learning English.

animation – n. a way of making a movie by using a series of drawings, computer graphics, or photographs of objects (such as puppets or models

album – n. a long musical recording on a record, CD, etc., that usually includes a set of songs

indie – adj. not connected with or created by a major producer of music or movies

version – n. a form of something that is different in some way from other forms