Why More College Students May Want to Consider a ‘Gap Year’

Update Required To play the media you will need to either update your browser to a recent version or update your Flash plugin.
By George Grow
27 May, 2017


American Rosalie Stoke is one of the millions of college students with a bright future ahead of her.

Stoke was born in Baltimore, Maryland. She studies chemical engineering at the Virginia Polytechnic Institute and State University, also known as Virginia Tech. But the 22 year-old's path to college was very different from the majority of Americans like her.

In the United States, it is common for young people to complete four years of high school at age 17 or 18. After they finish high school in the spring, those who decide to attend college usually do so two- to three-months later.

However, Stoke learned about a different way of doing things from an older student. That student said that before going to college, she worked for a year helping with childcare for a family in Germany. This idea appealed to Stoke very much. 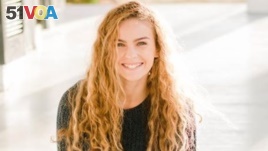 Rosalie Stoke is in her third year of studies at Virginia Tech. She took a gap year in 2013.

"It just sounded like a really great idea to have a year off to figure out more of what I wanted to do in college and after," she said.

So, after finishing high school in 2013, Stoke decided she also wanted to take a gap year before starting college.

What is a gap year?

Gap years are much more common in Europe than in the United States, especially among children born to wealthy families. The British newspaper The Telegraph reported that in 2014, five percent of first-time university students in the United Kingdom chose to wait a year before starting their studies. A gap year is often a time when young people travel or work to earn more money for school.

Now, more Americans are showing an interest in the idea of a gap year. The American Gap Association offers resources and information on gap years for students and parents. The non-profit group reports that each year between 30,000 and 40,000 young people in the U.S. choose to take a gap year.

In 2016, Malia Obama, daughter of then-president Barack Obama, received a lot of media attention when she made the same choice.

Like Malia Obama, Rosalie Stoke had already been accepted for admission by her university of choice. Yet they both decided to postpone the start of their studies by a year. In fact, several U.S. colleges and universities are now urging students to delay their studies to make use of a gap year.

In fall 2013, Stoke connected with a family in Barcelona, Spain. They agreed to let her live with them and paid her a small amount to help care for their children for seven months. Stoke studied Spanish during her free time in Barcelona. She then used money she earned from a part-time job she had in high school as well as money from her parents to travel for two months.

Stoke told VOA she felt different when she returned to the United States to begin her studies at Virginia Tech in 2014. She said she felt at ease and that she knew more about herself as a person. Also, when talking with friends who went straight to college from high school, she found many had a difficult time in their first year of college. Some told her they questioned the field of study they had chosen. Others said they felt lost at the college or that they were wasting time doing things like partying.

"The pressure to perform and do well is unbelievable. ... And quite frankly, many kids crash and burn, because the pressure is just too much."

Powell-Lunder says young people still have a lot to learn about themselves at the age when they usually go off to college. Taking a gap year may help reduce some of the pressure. Having more time to think about one's decisions can help mental health in the end.

Some concerns about taking time off

However, Mandy Savitz-Romer does have some concerns about the growing interest in gap years. Savitz-Romer is a professor with the Harvard Graduate School of Education in Massachusetts. She notes that many colleges are now looking for students with more than just strong academic records. They want students with strong connections to their communities and knowledge of the rest of the world.

Gap years may provide this, she says. Yet gap years are often only a possibility for students from wealthy families.

"As they grow in popularity, they will continue to give more advantage to the students who can afford to take them. ... And if, in fact, admissions offices begin to see that as an advantage ... we have yet one more way in which there'll be a widened gap in access to college."

When Steven Johnson grew up in Hammond, Indiana, his family did not have a lot of money. During high school, he got into trouble for bad behavior and fighting.

After completing his secondary education at a military school in 2009, Johnson knew he still was not ready for the demands of college. Instead, he chose to join a U.S. government-supported program called AmeriCorps.

AmeriCorps organizes groups of mostly college-aged volunteers on long-term projects around the country. These projects include things like building homes for disaster victims and improving grounds in national parks. In exchange, the program gives the volunteers money they can use toward a college education.

Normally, an AmeriCorps project lasts about 10 months. Steven Johnson worked with AmeriCorps for four years. He says the experience taught him valuable skills he needed when he began studying at Southwestern Michigan College in 2016. These skills included how to be a leader and how to work with different kinds of people.

"I had a different set of ideas than someone from upstate New York or the San Fernando Valley in California. But we all had to bring our collective heads together to work together for the betterment of the people that we were serving."

Ethan Knight created the American Gap Association in 2012. His group connects young people with and sets standards for volunteer gap year programs, such as those with AmeriCorps. He says no matter whether a gap year means a person is traveling, working or volunteering, it will likely be useful to them. His group reports that 86 percent of students who took a gap year were happier with their jobs later in life.

But a gap year is not just about postponing the difficulties of college. Knight says a gap year is only truly useful if it requires students to think about how their experiences have changed them and their ideas about the world.

"Rafting down a river, that's a good experience. Everyone will say they had a good time, but it's not translated into learning until there's some sort of reflection that happens."

Knight and Savitz-Romer agree that colleges should consider gap year experiences the same way they do hard work. And students who cannot afford a gap year still learn a lot from the struggles they deal with every day.

Pete Musto reported this for VOA Learning English. George Grow was the editor.

We want to hear from you. How common is taking a gap year in your country? What are the most common gap year experiences? Write to us in the Comments Section or on 51VOA.COM.

resource(s) – n. a place or thing that provides something useful

admission – n. the act or process of accepting someone as a student at a school

crash and burn – idm. come to trouble or fail greatly

advantage – n. something, such as a good position or condition, that helps to make someone or something better or more likely to succeed than others

standard(s) – n. a level of quality or achievement that is considered acceptable or desirable

rafting – n. the activity of traveling down a river on a plastic or rubber boat that you have to fill with air in order to use

reflection – n. careful thought about something