Update Required To play the media you will need to either update your browser to a recent version or update your Flash plugin.
By Anne Ball
03 August, 2019


One of the he world's biggest education company says it will release all of its books for the United States college market in digital form first. This breaks from traditional publishing, and from the more costly paper versions of college textbooks.

Pearson, a British company, provides textbooks, class materials and testing. In recent years, changes in the U.S. market have hurt Pearson's sales and profits, as more students are trying to save money by buying used textbooks. 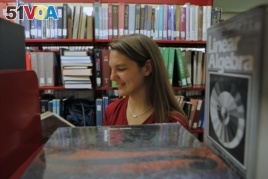 Pearson's sales have dropped each of the last five years. Thousands of people have lost their jobs, and the long-time business had to sell parts of the company to rebuild.

But now, there is good news for the company's business. Earlier this year, it said it was offering less costly digital versions of their textbooks. The company aims to see its sales grow in 2020.

John Fallon, Pearson's chief executive, told the Reuters news agency, "I am increasingly confident and excited about this."

Going forward, all future releases of its 1,500 current U.S. titles will be "digital first." The company will update the books whenever there are new developments in the area of study. Most printed textbooks are updated every three years.

Pearson's current e-books cost about $40. Students can bay $79 for extra learning tools connected to the e-books. Printed textbooks usually cost around $110, but can cost as much as $300.

Pearson leaders believe the change to digital first will help the company have more predictable earnings because students may have less of a reason to buy used books.

Pearson said 62 percent of its earnings now comes from digital or digital-enabled products and services.

The move to digital will also help the company cut costs. Fallon said the change gives him the belief he can stabilize the U.S. college business, and start growing his company's profits once again.

Neil Hall wrote this story for Reuters. Anne Ball adapted it for VOA Learning English. Ashley Thompson was the editor.

Do you read e-books? Let us know what you think of this story. Write to us in the comments section below.

textbook – n. a book about a particular subject that is used in the study of that subject especially in a school

stabilize – v. to become stable or to make (something) stable: such as : to stop quickly changing, increasing, getting worse