Colleges Plan Fall Opening, But Campuses Will Not Be the Same

Update Required To play the media you will need to either update your browser to a recent version or update your Flash plugin.
By Susan Shand
26 May 2020


Growing numbers of U.S. colleges and universities are saying they will reopen before autumn. There will be, however, big changes to college life to prevent the spread of the coronavirus.

Large lecture rooms will no longer be used. Student housing will not be full. Schools will require students to be tested for the virus. And some smaller colleges may even bar students from leaving their grounds.

Some universities have given up hope of offering in-person classes in the fall term. So, they will be offering students online classes. Yet others are announcing plans to welcome students back in August.

The schools that plan to open admit an outbreak of COVID, the disease caused by the virus, may force them to close again. But, their leaders say, financial and social demands are simply too strong to ignore. 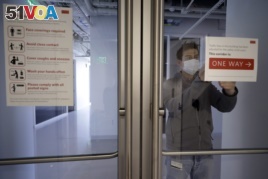 Kevin Gonzales, director of operations at the Rajen Kilachand Center for Integrated Life Sciences and Engineering, at Boston University, places safe distancing signage on glass doors on the school's campus, in Boston, Thursday, May 21, 2020. (AP Photo)

At West Virginia University, President E. Gordon Gee said students do not want to wait for a vaccine. He added that the university's finances were part of the decision.

If science were the only concern, "we would keep everything shut down until we have a vaccine and until it's working," he said. "We will open, but it will be different."

The California State University system has said its 23 campuses will stay mostly online this fall. School officials said they feared another outbreak of the virus later this year.

Others including the University of South Carolina and Rice University in Texas plan to reopen, but they will have a shorter fall term. They are hoping that another outbreak, if there is one, will hit in November or December.

U.S. President Donald Trump has urged schools to reopen, but his top infectious disease expert, Anthony Fauci, has expressed concerns. Last week, Fauci spoke at a U.S. Senate hearing about the coronavirus. He said he did not believe there will be a vaccine by the end of the summer. Trump said that was "not an acceptable answer."

Colleges and universities that plan to reopen have told students to expect social distancing measures to be enforced. This will include a requirement to wear face masks. College officials say there will be widespread testing, and students found to be infected will be put in quarantine.

But some Americans wonder whether the schools will be able to provide large numbers of tests.

In a call with 14 university leaders this month, U.S. Vice President Mike Pence promised to help colleges improve testing operations. But some on the call said details, especially about how to pay for the testing, was not clear.

"The testing is going to cost money," said Mike Lovell, president of Marquette University in Milwaukee, Wisconsin. He noted that many schools already have financial problems.

Once students are back on campus, the main goal will be to keep them apart, colleges say. Chairs will be placed at least two meters from each other. Big lectures will be made into smaller groups or move online. Some colleges are discussing teaching some classes outside buildings or in temporary shelters.

The biggest problem for colleges is the question of student housing. At some schools, housing meant for several students will be limited to just one or two. Restrooms will be restricted to just a few students.

At Trinity College, a school of 2,000 in Hartford, Connecticut, officials hope to place every student in their own room. College officials have been trying to find a way to make sure students will have space to sleep and study several meters apart.

At least one college may not let students leave the school's grounds. In a recent letter to students, Amherst College in Massachusetts said officials "may need to require that you limit your movement to on-campus locations only."

lecture – n. a presentation of information by a professor or teacher

outbreak – n. the sudden arrival of a contagious disease

shut down – v. the closing of schools, businesses and other outlets due to an outbreak of disease

campus – n. the land owned by a college or university

mask – n. a clothe clover for the mouth and nose

quarantine – n. to isolate someone so as not to pass on disease