Update Required To play the media you will need to either update your browser to a recent version or update your Flash plugin.
By Pete Musto
02 May 2020


Colleges and universities are working hard to close deep budget deficits. And some have been pushed close to financial ruin because of actions taken to protect people from the new coronavirus. Those measures have led to financial losses that could reach $100 million at some schools in the United States.

Ohio State University and the Nebraska State College System are among the schools returning money to students for things like meal plans and housing. Many schools are losing even more money from ticket sales after sports seasons were cut short. And some say the value of their investments has shrunk because of wild swings in stock prices. 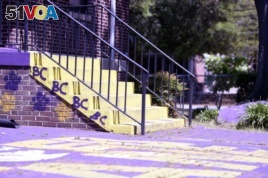 A courtyard typically teaming with Benedict College students is empty, except for one school employee, on Friday, April 3, 2020, in Columbia, S.C.

Yet even if school buildings reopen later this year, many U.S. experts on higher education worry large numbers of college students will not return. There is widespread fear that the weak economy will leave many Americans unable to pay for college. University officials are predicting sharp drop-offs among international students because of the coronavirus crisis as well. This is not only a concern in the U.S. In Britain and Australia, higher education leaders are also expecting billions of dollars in losses.

Many colleges and universities have stopped filling job positions and suspended work on building projects so they will have enough money to pay employees.

Johns Hopkins University in Maryland is famous for keeping detailed records of coronavirus cases and deaths. In a recent statement, the university's president Ronald Daniels warned of possible employee dismissals. Johns Hopkins expects a net loss of $100 million in 2020 and up to $375 million in losses in 2021.

Mary Papazian is president of San Jose State University in California. She estimates her school will lose $16 million by the end of May.

"We may be looking at cutting academic programs if it comes to it," she told The Associated Press.

But college and university presidents say their savings will only go so far. Many are asking their states and the federal government for more financial support to avoid deeper cuts.

In March, U.S. lawmakers passed a $2 trillion bill to help Americans hurt by the coronavirus pandemic. President Donald Trump signed the bill into law. The measure provides $14 billion for U.S. higher education. The American Council on Education, a group of college presidents, had requested $50 billion and called the bill "woefully inadequate."

Even colleges with large endowments are expecting a painful financial hit from the pandemic. On March 31, Yale University asked its department heads to amend their budgets in preparation of major losses.

The current conditions leave some colleges wondering if they can meet students' requests for financial assistance. Demands for financial aid are expected to increase as millions of Americans lose their jobs in the economic downturn. Many schools use their endowments to pay for financial aid, employees' wages and normal operations. But their investments have suffered deep losses as the value of stock shares dropped.

In Massachusetts, the endowment at the College of the Holy Cross has dropped in value by 15 percent. Officials there fear a similar drop in financial donations.

Perhaps the greatest question for schools is about what will happen in late summer. Recent studies have found that large numbers of high school students plan to take a gap year before starting college. At the same time, colleges and universities have been forced to cancel school visits and other events designed to appeal to future students.

Student enrollment is also major concern for colleges and universities that have come to depend on international students, especially those from China. Nearly 3,000 Chinese students attended the University of Connecticut last autumn. University officials say they are preparing for international student enrollment to drop by 25 to 75 percent. That will represent a loss of up to $70 million next year.

James Palmer says many American states had been slowly increasing their financial support for higher education over the past five years. But it is highly unlikely they will be able to continue doing so in the weeks and months to come.

Palmer is a professor of higher education at Illinois State University. He also works for Grapevine, a yearly study of state support for U.S. colleges and universities.

He told VOA a big problem is that many schools are still struggling with the immediate needs of student safety and moving classes online. As a result, they do not have the ability to think too far ahead.

"There really is no playbook or script for this. Right now, colleges and universities are in crisis mode," noted Palmer.

However, Brian Mitchell, a former president of Bucknell University in Pennsylvania, argues U.S. higher education is stronger than it appears.

Mitchell co-wrote the book "How to Run a College."

"These institutions have been around, in many cases, for 150 to 200 years and they have faced other major crisis," he told VOA. "They have shown they can do it, many of them. But whether they can, precipitated by a pandemic, is an open question."

Mitchell says some colleges may close, but others may join with other schools to share financial resources. He is most concerned about what will happen to colleges with small endowments. Many of these schools often serve local communities and poor and minority students.

The Associated Press reported this story. Pete Musto adapted this story for VOA Learning English. He also spoke with Brian Mitchell and James Palmer. George Grow was the editor. We want to hear from you. Write to us in the Comments Section.

ticket – n. a piece of paper that allows you to see a show, participate in an event, or travel on a vehicle

inadequate – adj. not enough or not good enough

endowment(s) – n. a large amount of money that has been given to a school or hospital and that is used to pay for its creation and continuing support

gap year – n. a year that you spend traveling, working, etc., before continuing your studies

enrollment – n. a policy or process by which parents may send their children to a different public school than the one in their own community

script – n. a plan for what is going to be done or said in a particular situation

mode – n. a particular way of doing something

precipitate(d) – v. to cause something to happen quickly or suddenly