Update Required To play the media you will need to either update your browser to a recent version or update your Flash plugin.
By Jim Dresbach
24 June, 2016


The Colombian government and the rebel Revolutionary Armed Forces of Colombia (or FARC) signed a ceasefire and disarmament deal this week.

The deal brings Colombia a step closer to ending more than 50 years of guerrilla warfare and terrorism. The conflict has left more than 200,000 people dead.

Cuba and Norway assisted with the talks.

U.S. Secretary of State John Kerry released a statement about the ceasefire deal. He called the truce, "welcome news" for the people of Colombia and everyone who desires peace.

The ceasefire is the last major step before both sides sign a final peace agreement. Santos said he expects that agreement will be signed on July 20. That is the anniversary of Colombia's independence from Spain in 1810.

Final issues to work out

Small issues need to be worked out before the Colombian people vote on the peace deal in a special referendum.

The main parts of the deal include a ceasefire, disarmament of rebel forces and land reforms. The agreement will give former rebels some political power. The former FARC fighters can avoid prison time in exchange for community service and travel restrictions. 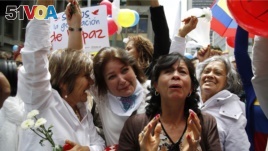 The two sides had expected to sign the final agreement in March. But questions remained on exactly how the conditions in the peace deal would be enacted. Another question was who would control a special war crimes court.

The most important questions are how the deal will be put into place legally. Some Colombia watchers wonder what will happen if the deal falls apart if a more conservative government takes power after Santos leaves office in 2018.

The Marxist FARC rebels launched their campaign against the government as a poor people's rebellion in 1964. They grew into a dangerous fighting force. FARC turned to drug trafficking and kidnapping to finance its guerilla war.

But the rebels failed to oust the Colombian government.

referendum – n. an event in which the people of a county, state or country vote for or against a law that deals with a specific issue

community service – n. work that is done without pay to help people in a community

drug trafficking – n. the sale and distribution of illegal drugs