Update Required To play the media you will need to either update your browser to a recent version or update your Flash plugin.
By Mario Ritter Jr.
23 April 2020


An environmental group in Colombia is leading a project to save wild areas in the San Lucas mountains with the help of coffee growers.

Gold mining and coca farming make more money than coffee growing. So the group WebConserva helps coffee growers by linking them with processors from around the country. The goal is to limit additional development in the northern San Lucas area which is rich in biodiversity, meaning many forms of life live there.

Colombia has more different kinds of living things than any country after neighboring Brazil, but destruction of forests has increased since 2016. 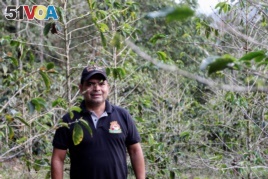 That year, the government signed a peace deal with the Revolutionary Armed Forces of Colombia ending years of civil war. As a result, more land became accessible for use. Government information shows that in 2017, almost 220,000 hectares of forest were destroyed compared to 124,000 hectares in 2015.

Areas like San Lucas have been threatened by mining and growers of coca plants, which are used to make the drug cocaine.

To date, the project includes 10 families who farm 400 hectares of coffee plants. WebConserva said the project costs about $77,000 dollars a year. The group said it hopes that, in time, 200 families will be included. At that level, 20,000 hectares of untouched forest could be protected.

In San Lucas, the families promise not to cut down trees to expand their crops or to hunt wild animals from the forest. In return, they receive $250 to $300 for 125 kilograms of coffee.

Arcadio Barajas is among those taking part. His new coffee plantation establishes a barrier between cattle ranches and forests where wild animals like the jaguar live and hunt. The presence of the coffee fields reduces the likelihood that there will be conflict between cattle ranchers and the big cats.

Barajas said that cutting down the forest to plant coca and killing wildlife were against his faith. But now he feels that growing coffee lets him be a good steward of the land.

"I'm taking care of the environment, the forest and the animals, so that I don't end up ruined as well," he said.

The Swiss environmental group, the International Union for Conservation of Nature publishes a Red List of endangered living things. It says more than 31,000 species are threatened with disappearing. Of those, 1,050 species live in Colombia and 187 are considered highly endangered.

Arnobis Romero is a former coca grower and miner. He said many families depended on illegal activities to support their children. For example, at times one kilogram of Coca could be sold for $760.

Romero said, "We feel really proud to look after this biodiversity and to leave it...for future generations."

Colombia has set aside 16 percent of its territory as protected land. But each year, hundreds of thousands of hectares of land are destroyed. Activists want San Lucas to be protected as a national park, but the process has been slow.

Carlos Valderrama is director of WebConserva. He hopes the group's project can build a system of production that will last far into the future.

"It protects forests, biodiversity and ecosystems at the same time as (improving) coffee growers' quality of life," he said.

Oliver Griffin reported this story for Reuters. Mario Ritter Jr. adapted it for VOA Learning English. Hai Do was the editor.

accessible –adj. able to be reached, within reach

ranch –n. a farm where large animals, such as cattle or horses are raised

steward –n. a person who takes care of land or property of another person

species –n. a separate group of animals or plants that can produce young