Update Required To play the media you will need to either update your browser to a recent version or update your Flash plugin.
By VOA
26 September, 2016


Colombia and the country's main rebel group have signed a peace deal aimed at ending more than 50 years of conflict in the South American nation.

Colombian President Juan Manuel Santos and the top rebel commander, known as Timochenko, met in the port city of Cartagena to sign the peace document.

Many rebel leaders of the Revolutionary Armed Forces of Colombia, known as FARC, were among more than 2,500 people witnessing the signing.

A long time in the making

The peace deal between FARC and the government took four years to negotiate. The sides agreed to the deal in June. The negotiations mainly took place in Havana, Cuba after starting in Oslo, Norway in 2012.

The signing, however, is not the final step.

The agreement must be approved in a referendum to be held on October 2. At least 13 percent of registered voters must take part in the referendum for it to be valid.

An end to the longest conflict in the Americas?

The conflict between Colombia's government and FARC rebels has been long, complex and deadly. It has been blamed for more than 220,000 deaths and has displaced millions of people over half a century.

FARC started as a revolutionary movement of poor farmers in the mid-1960s. It was supported by Cuba and the former Soviet Union.

FARC funded its operations mainly through illegal trade in the drug cocaine. Much of those drugs went to the United States and Europe.

He said, "Colombians have learned over decades of attempted negotiations with other terrorist groups, it is that impunity always becomes the seed of new forms of violence."

But the current president, Juan Manuel Santos, has argued that compromise was needed to get rebels to turn over their weapons. 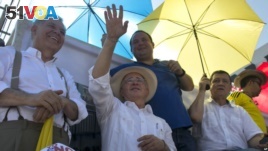 Colombia's former President Alvaro Uribe at a demonstration before the ceremony to protest the signing.

Help for farmers, security in exchange for disarmament

Supporters of the deal say it calls for the government to work with coca farmers to get land titles. That part of the agreement addresses anger by small farmers about unequal land ownership.

The deal also provides help in the transportation of crops other than coca leaves, which are used to make cocaine.

The peace agreement also requires the government to campaign against violent criminal groups known as BACRIM. Some of these groups were once paramilitary fighters. They also trafficked in cocaine, fought FARC and targeted rights activists.

FARC members can avoid prison if they admit their crimes and make reparations in what is being called a truth-and-reconciliation process.

FARC would become a legal political party and gain representation in congress.

If the agreement is approved by the October referendum, FARC's 7,000 fighters would begin moving to special areas. They would then hand over their weapons to United Nations-supported observers.

FARC has also agreed to cooperate with efforts to remove mines from the country. Colombia is estimated to have the second largest number of mines in the world after Afghanistan.

A U.S. official, who asked not to be named, said the peace deal is more than an agreement to put down weapons.

"It really includes a major transformation of Colombia itself. It includes a far-reaching commitment to bring government services, security, police, education, health, roads, economic development to the vast stretches of the interior that have been left out of national life," said the official.

If FARC does disarm, Colombia still will have to deal with armed, violent groups. Under the deal, the government has promised to control the BACRIM.

But, it still has no peace agreement with the smaller rebel group called the National Liberation Army.

Reports by VOA's Steve Herman and Jeff Swicord were combined with AP materials to make this report for VOA Learning English. Kelly Jean Kelly was the editor.

referendum – n. a public vote on a specific issue rather than a representative

valid – adj. approved, according to the law

reconciliation – n. the act of causing people or groups to become friendly again after conflict

interior – n. the part of a country that is far from the coast