Update Required To play the media you will need to either update your browser to a recent version or update your Flash plugin.
By Jill Robbins
28 September 2022

Sinisterra calls it "resistance" fashion. And his colorful designs for Marquez have since drawn international attention.

Sinisterra grew up in the town of Santa Barbara Iscuande, in the Narino area. He says many young people there have few opportunities to escape involvement in the ongoing conflict in the country. 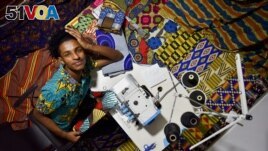 Esteban Sinisterra poses for a photograph at his studio in Cali, Colombia September 7, 2022. (REUTERS/Jair Coll)

His background is not very different from that of Marquez. The Vice President is a former housekeeper and environmental activist. She grew up in the poor town of Suarez in Cauca. Because she opposed gold mining, she faced death threats.

"In one way or another her history and my history are similar, so I think there was a very lovely spark there," said the 23-year-old Sinisterra. He now lives in the city of Cali and studies social work in addition to his job as a designer.

Sinisterra learned to make clothes from his aunt and grandmother. Describing his similarities with the Vice President, he said, "First we accept and recognize that we have roots that connect us - which is Africa - but taking into account those roots we also express the territory where we're from, the Colombian Pacific."

The clothes make you think of those roots, Sinisterra said. "It is being able to show that this is who we are...so for me fashion, my fashion, is resistance."

Jair Fernando Coll reported on this story for Reuters. Jill Robbins adapted it for Learning English.

fashion – n. the area of activity that involves styles of clothing and appearance

opportunity – n. a situation in which it is possible for you to do something that you want to do

spark – n. a small amount of a quality or feeling