Contrast in Color Between Tony and Oscar Awards

Update Required To play the media you will need to either update your browser to a recent version or update your Flash plugin.
By Dan Friedell
13 June, 2016

James Corden, a white comedian, opened the Tony Awards on Sunday night by saying, "think of tonight as the Oscars, but with diversity."

By contrast, Chris Rock, a black comedian, had opened the Oscars show last February by welcoming people to the "white People's Choice Awards."

Of the 40 actors nominated on Sunday night at the Tony Awards, 14 were of color. Black actors won four of the major acting awards.

Leslie Odom Jr. is a black actor who plays Aaron Burr in Hamilton. He won the best leading actor in a musical award over his cast-mate Lin-Manuel Miranda. Miranda created the musical and played the title role of Alexander Hamilton. Miranda is of Puerto Rican heritage. 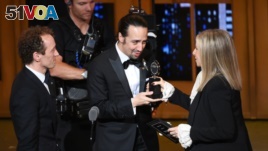 Barbra Streisand, right, presents the award for best musical to Lin-Manuel Miranda, center, of "Hamilton," as producer Jeffrey Seller looks on at the Tony Awards at the Beacon Theatre on Sunday, June 12, 2016.

Cynthia Erivo, a black actor from Great Britain, won for her role in The Color Purple. African-Americans Daveed Diggs and Renee Elise Goldsberry also won for their performances in Hamilton.

One person following the Tony Awards on Twitter compiled photos of four of the black winners with the hashtag TonysSoInclusive.

Last February, the Oscars were criticized for not nominating any black actors for its major awards for the second year in a row. People protested the awards show and the social media hashtag #OscarsSoWhite was trending.

While Miranda lost the best leading actor award to a fellow cast member, his musical Hamilton was the big winner of the night.

Miranda won awards for best new musical, best musical book and best original score. The show won 11 awards on Sunday night, only one short of the record held by The Producers.

The musical is about the life of Alexander Hamilton, one of America's founding fathers. Hamilton was not a president, but he fought in the Revolutionary War, persuaded the states to accept the Constitution, and helped create the country's national banking and economic system.

Other well-known actors won awards on Sunday: Frank Langella won for his role in The Father; Jessica Lange won for Long Day's Journey Into Night; and Jayne Houdyshell, who has been performing for 40 years, won her first Tony for The Humans.

Do you think the Oscars will be different in 2017 after seeing the success of the Tony Awards this year? We want to know. Write to us in the Comments Section or on 51VOA.COM.

compile – v. to put together (various songs, pieces of writing, facts, etc.) in a publication or collection

protest – v. to show or express strong disagreement with or disapproval of something

argument – n. a statement or series of statements for or against something

score – n. a document showing all the notes of a piece of music