Colorado Shooting Is Second Mass Shooting in a Week

Update Required To play the media you will need to either update your browser to a recent version or update your Flash plugin.
By Hai Do
23 March 2021


Ten people, including a police officer, were shot and killed at a food store in the American state of Colorado Monday night. The attack followed a mass shooting that killed eight people in Georgia last week.

Colorado police arrested 21-year-old Ahmad Al Aliwi Alissa at the the attack site. Officials said he lives in the nearby town of Arvada. Police said that Alissa used a semi-automatic firearm in the attack, that he bought last week.

A shootout with police left Alissa wounded. He received treatment at a hospital and was taken to jail Tuesday. He is expected to face 10 murder charges.

Boulder Police Chief Maris Herold identified 51-year-old Eric Talley as the officer who was killed in the shooting. The nine other victims were between the ages of 20 to 65, police said.

Hundreds of police officers from throughout the Denver area surrounded the store, helping those inside escape the violence.

Boulder County District Attorney Michael Dougherty said police have not established why the shooter attacked. But he promised to "secure justice" in the case. 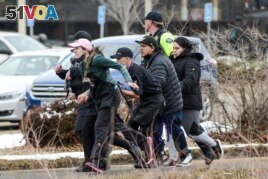 King Soopers employees are led away from an active shooter at the King Soopers grocery store in Boulder, Colorado, U.S. March 22. 2021.

The Associated Press reports the attack was the seventh mass shooting this year in the U.S.

On Tuesday, Nancy Pelosi, Speaker of the U.S. House of Representatives, released a statement offering prayers for the victims and their families. She also called for immediate action to prevent more shootings, noting two gun control measures passed by House lawmakers earlier this month. The bills concern background checks for gun purchase and are now in the U.S. Senate for consideration.

At a Judiciary Committee hearing Tuesday on gun violence, Senator Ted Cruz of Texas expressed opposition to such bills.

"Every time there's a shooting, we play this ridiculous theater where this committee gets together and proposes a bunch of laws that would do nothing to stop these murders," he said.

Speaking from the White House, President Joe Biden said Tuesday, "This is not -- it should not be -- a partisan issue. This is an American issue." He added, "I don't need to wait another minute, let alone an hour, to take common sense steps that will save lives in the future." The president called on Congress to ban assault weapons, high-capacity magazines, and strengthen the background check system.

Biden announced that American flags nationwide will be lowered in honor of the victims in Boulder. The order comes just as the order to lower the flags for those killed in Atlanta is about to end.

Hai Do adapted this story for Learning English based on reports from the Associated Press. Caty Weaver was the editor.

semi-automatic - adj. having a mechanism for self-loading but not continuous firing.