Update Required To play the media you will need to either update your browser to a recent version or update your Flash plugin.
By John Smith
12 March, 2017


Scientists think they have discovered a way to use a common bacteria to stop disease-carrying mosquitoes from reproducing.

They say the discovery could make it possible to control the mosquito that spreads two viral diseases: Zika virus and dengue.

The bacteria is called Wolbachia. It can infect up to 70 percent of the insect species on Earth.

The bacteria has changed in different ways over time. Some insects need it to stay alive. Wolbachia can act as a parasite in other insects. It can even affect the ability of eggs to produce young. However, experts say it does not infect many disease-carrying mosquitoes.

But researchers may have found a way to use the bacteria on mosquitoes that carry two viral diseases, Zika and dengue. 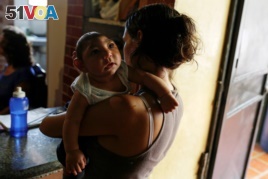 FILE - Ericka Torres holds her 3-month-old son, Jesus, who was born with microcephaly, at their home in Guarenas, Venezuela, Oct. 5, 2016.

Experts say a woman infected with Zika virus early in her pregnancy is at risk of giving birth to a baby with microcephaly. Microcephaly causes mental and physical disability, seizures and sometimes death.

Dengue can make people very sick. A person develops a condition like influenza. The disease can also turn deadly.

John Bechmann is an entomologist — someone who studies insects -- at Yale University in Connecticut.

"It's kind of been the issue with the Wolbachia field is that all of the insects that are really, really medically relevant don't have their own Wolbachia infection. So that's one reason why this is such an important discovery is because that's been one thing that's limited the field is people have always tried to make these fake or non-natural infections that can infect these mosquitoes. Now we don't have to do that -- we can just put the genes in."

Aedes aegypti is the name of a mosquito that carries Zika and dengue.

Researchers at Yale and Vanderbilt University in Tennessee are studying the Wolbachia bacteria. They reported finding two genes that might make the mosquitoes unable to have young.

The researchers have performed successful experiments in fruit flies. And they believe they can do the same with mosquitoes.

The scientists reported success with two ways to stop the spread of Zika and dengue. The first was to place many male mosquitoes carrying Wolbachia in an area. When these males mate with uninfected females, the bacteria kills life in any eggs the female is carrying.

Reports on the Wolbachia gene discovery were published in the journals Nature and Nature Microbiology.

John Bechmann says controlling the two diseases may one day be as simple as breeding Wolbachia-carrying mosquitoes, then releasing them into the wild.

"The problem has always been figuring out systems that can work well in mosquitoes, and this seems like this is going to be one that's going to be great for that."

He adds that the discovery may also work with Anopheles gambiae, the mosquito that carries malaria.

The World Health Organization says there are 214 million cases of malaria each year. And the disease kills over 400,000 people a year worldwide.

Because the mosquitoes are genetically engineered, Bechmann says he is concerned about legal barriers on the release of sterilized mosquitoes. He and other researchers are working to find money to pay for more experiments.

offspring – n. the young of an animal or plant

fake – adj. of or related to something made to seem other than it really is