Update Required To play the media you will need to either update your browser to a recent version or update your Flash plugin.
By Dan Friedell
16 October 2022


Reggie Carrillo is an environmental activist who lives in the Southwestern U.S. city of Phoenix, Arizona.

He recently told the Associated Press that climate change affects the temperatures of city neighborhoods. 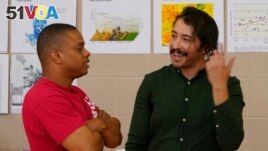 In Phoenix, some neighborhoods do not have many trees and open spaces. Some reports say temperatures are as much as seven degrees Celsius higher than in other areas of Phoenix with more trees. Those parts of the city were built with mostly roads and buildings but not much green space. That has helped create what Carrillo and others call an "urban heat island."

Carrillo has learned about the city's history by attending the Urban Heat Leadership Academy that is run by groups trying to conserve natural resources. They are working to add green space to parts of Phoenix that have not received attention.

The Nature Conservancy is providing some of the money. The international group is known for projects that protect natural areas. But it is now getting involved in cities like Phoenix and Atlanta, Georgia by planting trees and building community gardens.

The academy holds classes by video link on Saturday mornings. It helps teach people like Carrillo about why their living areas are so hot. It also teaches them how to organize activities that will help cool things down. They discuss air and water quality and how to push for better treatment of parts of the city where minorities live.

Phoenix is in the Sonoran Desert in the American Southwest. But other parts of the country known for cooler temperatures – such as Seattle, Washington – are also reporting high temperatures.

Other parts of the U.S. are seeing a wider range of temperatures. For example, Philadelphia winters can be well below zero Celsius. But the city also has hot summers.

A group called Trust for Public Land is working in Philadelphia in the same way as the group in Phoenix. The group is making public art to teach people about climate change and is giving out small trees for people to plant.

Owen Franklin leads the Trust for Public Land in Pennsylvania. He said the project in Philadelphia is making people think about why some parts of the city experience temperatures up to 11 degrees Celsius hotter than others.

He has talked with people who live in those hot neighborhoods. He said people who live in poor parts of the city often sleep with their windows closed on hot nights because they are worried about crime. Franklin said "the rest of us need to know what people experience" so organizations such as his can "combat the problem."

In Phoenix, Carrillo is working with others who went to the Urban Heat Leadership Academy. They want to build a walking area that will be known as a "cool corridor," a place that has local plants that can help reduce temperatures. He also is organizing events to talk to people and to learn what they want.

Anna Bettis works with The Nature Conservancy in Arizona. She said the first class last year had about 40 people. It discussed the science of how plants can cool living areas.

"We are trying to help people work on solutions that will cool down their neighborhoods over the long term," she said. Bettis talked about shade, or the area of darkness created when something blocks the sun. She said, "...you can see how unequally it is distributed in some neighborhoods."

Summer temperatures in Phoenix can be dangerous. One day last summer, the high was over 46 degrees Celsius. In the last year, the heat was blamed for over 300 deaths.

Other people in Phoenix are working with Carrillo on ways to reduce the heat. He talked with students from a design class at nearby Arizona State University during an event at a school for young children.

One of the school teachers was Teresa Silva. She said many of the students walk a long distance without shade in order to get to class. The temperature can be 37 degrees, she said. The parents of most students have more than one job and do not have the time to drive them to school.

Curtis Merritt is planting trees in another part of Phoenix. He is another graduate of the academy, like Carrillo. Merritt said many people have trouble getting enough food each day. So he is planting fruit trees – figs, apples, and oranges.

"What's great about this project is that I not only get to help cool down my neighborhood by teaching...," said Merritt. "Someday with those trees I'll be able to feed my neighbors, too."

conserve –v. to keep something from being damaged or destroyed

range –n. a series of numbers that include the highest and lowest of values in the series