Update Required To play the media you will need to either update your browser to a recent version or update your Flash plugin.
By Ashley Thompson
15 November 2021


On a field in Iceland, metal structures move in circles in an effort to take carbon gasses out of the atmosphere.

The goal of the fans and other machines is to take carbon dioxide from the air and store it underground. This technology is known as "direct air capture." Just a few years ago, it was considered unimaginable. But today, it is believed to be a serious tool in fighting climate change.

The air capture center in Iceland is named Orca. It is the largest center of its kind in the world. It captures about 4,000 tons of carbon dioxide per year.

But, compared to what experts say the planet needs, that amount is small. Some scientists say 10 billion tons of carbon dioxide must be removed yearly by 2050.

Julio Friedmann is a researcher at the Center on Global Energy Policy at Columbia University in New York. He said, within the next 30 years, "We need a worldwide expertise that is twice as big as the oil and gas industry and that works in reverse."

Many scientific agencies say that, even if production of carbon gasses stopped, it would not be enough to avoid climate problems. These experts say huge amounts of carbon dioxide must be removed from the air and put underground.

"We have already failed on climate to the extent to which direct air capture is one of the many things we must do," Friedmann said.

Both companies have goals to expand. 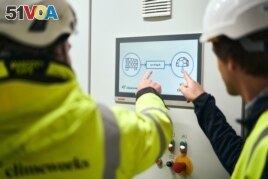 This September 2021 image provided by Climeworks AG shows a chart at a plant called Orca near Reykjavik, Iceland. The plant is the largest such facility in the world, capturing about 4,000 metric tons of carbon dioxide per year.

Climeworks' Orca plant is near Reykjavik, Iceland's capital. There, fans suck air into big black boxes where the carbon dioxide collects on a filter. A filter is a device that captures the unwanted substances passing through it.

The carbon dioxide is then heated with energy from volcanic activity. Next, it is combined with water and pumped deep underground into basalt rock formations. Within a few years, Climeworks says, the carbon dioxide will turn into stone.

It takes a lot of energy to build and run Climeworks' plants. The Orca plant, for example, releases 10 percent of the carbon dioxide that it captures back into the atmosphere.

Another company, Carbon Engineering, has plants that can operate on renewable energy or natural gas. When natural gas is used, the carbon dioxide created is recaptured.

Carbon dioxide can also be injected into used up oil and gas fields. Carbon Engineering is using this method in partnership with Occidental Petroleum, an oil company. The two businesses plan to build what might be the world's largest direct air capture center in the Permian Basin — the productive oil fields in the Southwestern United States.

Direct air capture plants around the world are removing about 8,160 tons of carbon dioxide from the air each year. That information comes from the U.N.'s International Energy Agency.

Daniel Egger is the chief commercial officer at Climeworks. He said that while his company is at an "industrial level," it is not where it needs to be to make a difference in fighting climate change.

Colin McCormick said it currently costs about $500 to $600 per ton to remove carbon dioxide using direct air capture. McCormick is an official at Carbon Direct, based in New York City. The company invests in carbon removal projects and advises businesses on buying those services.

Within the next 10 years, experts say, the cost of direct air capture could fall to about $200 per ton or lower.

For years, companies did things like planting trees to make up for, or offset, the carbon gasses they produced. But recent studies suggest many offsets are not good enough. McCormick said companies are looking for more carbon removal services that are easier to prove. Direct air capture, he said, is considered the "gold standard." In other words, it is the best choice available.

"This is really exploding," he said of companies investing in the technology. He said companies like Microsoft, Stripe and Shopify made a goal of removing carbon from the atmosphere two years ago.

Companies are setting targets for their operations of releasing no new carbon gasses. As a result, some are choosing to buy carbon removal services such as direct air capture to reach those goals.

And individuals can buy carbon recovery services, too. Climeworks offers agreements starting at $8 a month to people who want to pay for the removal of the carbon gasses they produce.

fan –n. a machine or device that moves air around

reverse –v. to cause a process to stop or return to an earlier state

extent –n. the point or limit to which something reaches and no further

suck –v. to pull in liquid or air forcefully inward

basalt –n. a kind of rock formed from volcanic activity

capacity –n. the amount of something that can be produced by a factory or company