'Complicit' Is Dictionary.com's Word of the Year

Update Required To play the media you will need to either update your browser to a recent version or update your Flash plugin.
By Dr. Jill Robbins
28 November, 2017


Every year, language researchers and dictionary publishers choose a "Word of the Year." The word often reflects the news or social media trends during the year.

The American Dialect Society started the practice in 1991. This year, Dictionary.com selected the word "complicit" as its word of the year.

The online dictionary site chooses its Word of the Year based on the number of people who look up the word's meaning. Overall, there were 300 percent more people looking up the word "complicit" in 2017 than there were in 2016.

Before you run to look up the word, too, we will let you know that Dictionary.com says complicit means "choosing to be involved in an illegal or questionable act, especially with others."

Staying silent about crimes is being complicit

Jane Solomon is an editor at Dictionary.com. She told The Associated Press that there were many discussions in 2017 about people in power and the people around them who stayed silent about crimes they may have seen.

"This year a conversation that keeps on surfacing is what exactly it means to be complicit," she said. "Complicit has sprung up in conversations about those who speak out against powerful figures in institutions, and those who stay silent."

Interest in "complicit" began with a satire video on Saturday Night Live, a weekly television comedy. The video shows a fake commercial for a perfume designed by Ivanka Trump, a daughter of the United States President Donald Trump. The name of the perfume is "Complicit." A voice in the video explains, "She's beautiful, she's powerful, she's complicit." The satire tries to connect Ms. Trump with accusations that people in her father's election campaign broke laws.

About a month later, Ivanka Trump appeared on a morning news television program and said, "I don't know what it means to be complicit." Since she did not explain, more people looked up the word.

Senator says he will not be complicit

On October 24, Arizona Republican Senator Jeff Flake announced from the Senate floor that he would not try to win another term in the Senate. He criticized President Trump and asked other members of his party not to silently support the president. 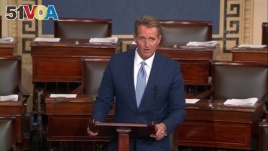 U.S. Senator Jeff Flake (R-AZ) announces he will not seek re-election as he speaks on the Senate floor in this still image taken from video on Capitol Hill in Washington, Oct. 24, 2017.

"I have children and grandchildren to answer to, and so, Mr. President, I will not be complicit," Flake said.

Solomon says that another reason for the increase in look-ups for "complicit" is the accusations of sexual harassment against movie producer Harvey Weinstein. Some of Weinstein's associates say that they knew about the accusations years earlier, but were afraid to say anything about it publicly.

More words of the year to come

Keep your eyes open for more "Word of the Year" awards coming up in December and January. We will help you to add those words to your vocabulary in English, too.

Dr. Jill Robbins wrote this story for Learning English based on an AP report. Hai Do was the editor.

complicit - adj. helping to commit a crime or do wrong in some way

satire – n. humor that shows the weaknesses or bad qualities of a person, government, or society

harass - v. to annoy or bother (someone) in a constant or repeated way