Update Required To play the media you will need to either update your browser to a recent version or update your Flash plugin.
By VOA
07 August, 2014

People who steal online information cause billions of dollars in damage every year. These criminals are called "hackers." The damage would be even greater if there were not security workers who defend computer systems against attacks. Experts say these workers need to know the weaknesses of their systems so they can better-defend them.

Earlier this month, VOA reporter Mike O'Sullivan visited a week-long "hacker" training program in San Diego, California. Young people were being taught how to hack computer systems in order to learn how to fight criminal hackers.

About 20 high school students took part in the five-day-long program. They were among the winners of a local computer competition. Sixteen-year-old Chloe Chrisostomo is one of the students. 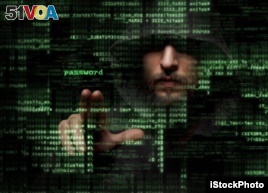 Young people are being taught how to "hack" into computers so the can help prevent computer attacks.

Students are also being taught about online spying and the sale of stolen information.

This kind of training is important to companies and governments. They want more young people to enter the information security field to help defend against online, or cyber criminals, because attacks are often very costly. Just one successful attack can cost millions of dollars.

It is a problem throughout the world. Police in such countries as India and Romania are having a difficult time fighting cyber criminals.

A recent computer-industry report said attacks on computer systems will cost more than $350 billion this year. Hundreds of billions of dollars will also be spent to stop such attacks.

Trainer Cameron Camp is a security researcher and writer. He says the students are learning how to attack the kinds of computer systems that companies are now using.

Jomarri Salomon recently graduated from high school. He says the training helped him understand why computer criminals do what they do.

Liz Fraumann works at the nonprofit foundation Securing Our eCity, which helped organize the training. She says students in the program learn a lot more than they think they will.

"When we look at them initially, they think they know it all. They know a lot already. And by Wednesday [they say], ‘I do not know quite as much as I thought.'"

Cameron Camp says he hopes the students will use what they have learned to help, not hurt, computer users.

"And we would like to convince these folks who are skilled computer people that the rewards in the end are much better for working for the good guys rather than the bad guys."

I'm Caty Weaver. Join us again next week for another American Mosaic from VOA Learning English.