Update Required To play the media you will need to either update your browser to a recent version or update your Flash plugin.
By VOA
05 November, 2012

From VOA Learning English, this is SCIENCE IN THE NEWS in Special English. I'm Shirley Griffith.

A new system has been developed to measure the health of the world's oceans. Scientists say the system will change the way we think about oceans and how they affect our lives. It is called the Ocean Health Index. The index is designed to tell if anything is wrong with the oceans and, if so, what can be done about it.

Greg Stone is chief ocean scientist for the environmental group Conservation International. He is also vice-chairman of the Global Agenda Council on Oceans at the World Economic Forum. 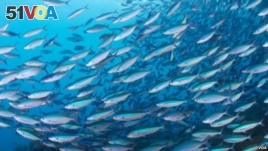 Scientists call oceans the world's most important resource. (Conservation International)
"The Ocean Health Index is the first global, totally scientific and transparent measure of ocean health that we've ever had. It's meant to guide policymakers and the public to the underlying importance that the oceans are the life support system of the Earth and that we'd better take care of them if we are to survive on this planet."

Greg Stone spoke to VOA from the Cook Islands in the South Pacific. Representatives from sixteen island nations met there earlier this year to talk about caring for the ocean. Mr. Stone says oceans are the Earth's most important resource.

"You can't manage anything that you can't measure. So, like any good portfolio investments, if you want to make sure you are prospering and you're taking care of your investments -- and believe me, the health of our planet is no greater investment that there could be -- you need a metric in order to measure it and see that we have a sustainable relationship with this resource on an ongoing basis."

He says the Ocean Health Index will help end a lot of ignorance about the seas.

"You may have heard from one source or another that, ‘Oh, hey, the oceans are in trouble' and you say ‘Why are they in trouble?' And then somebody says ‘Well, the coral reefs are dying.' And then the next day someone will tell you that ‘the tuna fish are all gone' or ‘the haddock are all gone' or ‘the halibut are all gone.' And you say ‘Oh OK, I hear that.' And then someone else will say ‘The oceans are turning acidic' -- which they are. It's been a very confusing landscape of information."

And he says whether you live in the United States or in the middle of Africa, you should care about what happens to the oceans.

"Most of the oxygen that you breathe comes from the ocean. The oceans are the primary climate adaptation system. They absorb carbon. Hey, listen, if you want to know what the Earth would be like without an ocean you've got plenty of examples in our solar system -- all those hot, dusty, dry, cold inhospitable places are basically that way because they do not have a liquid ocean to provide all these benefits, including food. One out of four people on the planet get their daily source of protein from the ocean."

The Ocean Health Index uses two hundred separate measurements. Once a year, scientists will use it to announce whether the oceans successfully passed the test.

People have looked to nature for medicines since ancient times. And modern scientists have searched the world's rainforests for new medicines. But the ocean may be an even better source. At least twenty-six drugs that come from sea organisms are currently being used or developed. And a new generation of chemists hopes to increase that number.

Chemist Mande Holford has an unusual partner in her hunt for new medicines: a fierce, little snail that eats fish. But she admits that her studies of the creature are not all scientific.

"I fell in love with snails because their shells are gorgeous."

Yet the tongue-like proboscides of the snails are deadly. They inject their victims with venom made of poisonous chains of amino acids called peptides.

"What I like to say is that the snails produce sort of a cluster bomb. Inside of each venom, you have between fifty to two hundred peptides, and all of those peptides target something major along the nervous system. One thing that they hit is a pain signal. When they silence the pain signal, the prey doesn't go into fight or flight mode."

So the fish stays calmer than it normally would, even as it is being eaten! Mande Holford says chemists have already had one major success using the snail's peptides. It is a drug called Prialt. It eases pain for people with cancer and HIV, the virus that causes AIDS.

"On your neurons, you have these ‘gates' that allow things to pass back and forth. The gate that controls chronic pain, they found a way to shut it down using one of the peptides."

At first, Mande Holford may have wanted to study snails because of their beauty. But she is part of a larger movement toward marine, or undersea, research.

After years of collecting organisms on land, Mr. Newman's team now collects only sea creatures such as sponges or corals. He says that because these creatures cannot move, they use chemicals to fight.

"I have been known to say that weapons of mass destruction are alive and well on a coral reef, if you happen to be a fellow sponge who's trying to encroach or you're a starfish that's trying to eat the sponge. These are extremely toxic agents because of the dilution effect of seawater."

For an organization looking for ways to kill cancerous cells, such powerful chemicals are an inviting weapon.

William Fenical directs the Center for Marine Biotechnology and Biomedicine at the Scripps Institute for Oceanography in California. He says that about nine kilometers underwater lies what may be an even more promising source of medicine -- mud.

"Close to seventy percent of the surface of the earth is really deep ocean mud."

His team studies microorganisms living on the ocean floor.

"These muds contain about one billion cells in the volume of a sugar cube."

For comparison, that is one-million times the organic matter you are likely to find in a similar amount of soil on land. The large number of sea creatures excites Mr. Fenical.

"For the last fifty years, microorganisms that occur on land have been exploited for the production of antibiotics, cancer drugs, and cholesterol-lowering drugs. What we believe is that the ocean is a completely new resource for such microbial products."

His team already has two drugs in development. And he believes there will be many discoveries of ocean-based medicines.

A small blood-sucking crustacean has been discovered in the Caribbean waters off the Virgin Islands. The creature may help increase scientists' understanding of how disease is passed among marine animals.

The new species is called Gnathia marleyi. It was named for the reggae star Bob Marley. Paul Sikkel is a marine biologist at Arkansas State University. He says the species is the first new find in the crustacean-like gnathiid family in twenty years.

"What's interesting about them is that they're only parasitic in the juvenile stage. So they only feed when they are juveniles, and they go through three different juvenile stages -- one bigger than the other, each bigger than the other. And they look a little bit like, like ticks or fleas. They look very similar to, you know, to terrestrial blood feeding organisms."

Paul Sikkel captured the juvenile marleyi at what researchers call a "cleaning station." That is a place on the coral reef where big fish gather so smaller fish and shrimp can eat parasites that have joined to their skin. Parasites depend on other creatures for food and shelter. However, the adult male marleyi do not eat. They just mate and die.

Mr. Sikkel studied the species in a laboratory.

"Adult males look a little bit like bulldozers. They have square heads, and they have these pincers on their head and they are very cool-looking. And the females -- small head and a really big body that's full of eggs."

About eighty percent of all organisms found on coral reefs are parasites. Gnathiids are among the most important parasites in the oceans. Mr. Sikkel says the levels of gnathiids can show how healthy a reef is. In some waters, he is seeing fish more heavily covered with gnathiids -- marleyi among them.

Mr. Sikkel suspects that Gnathia marleyi may also be important in passing a malaria-like fish disease that weakens the animal's natural defenses. His team is currently studying whether this pathogen is also present in the Caribbean.

"And then from there, once we find the species of fish that are infected, then we'll do experiments to determine whether or not the gnathia marleyi actually plays a role in transmitting those blood-born organisms."

Paul Sikkel hopes his discovery will lead to more information about parasites and the effect they can have on marine environments.
Related Articles
go top