Update Required To play the media you will need to either update your browser to a recent version or update your Flash plugin.
By Dan Friedell
21 June, 2017

The FIFA Confederations Cup started on June 17 and will end on July 2. It is a warm-up for next year's World Cup in Russia.

Soccer fans are watching the games to get a feel for what the 2018 tournament will look like. Games are being played in Kazan, Moscow, Saint Petersburg and Sochi. 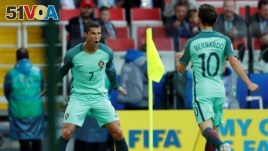 As the host country, Russia is playing along with seven other nations, including Mexico, Portugal, Germany, Chile, Cameroon, New Zealand and Australia.

Those countries qualified by winning either the most recent World Cup or their regional confederation's tournament.

The teams are divided into two groups of four. Each team plays three group games and the top two teams advance to the semifinals.

The hashtag #RUSPOR was trending around the world when the game started.

Last Sunday's game between Mexico and Portugal may have been the best so far. Ronaldo was named the best player in the game. It looked as if Portugal was going to win, but Mexico's Hector Moreno scored in the 91st minute to make it 2-2.

Russia will likely need a win against Mexico on June 24 to move into the elimination round of the tournament.

Vladimir Ponmarev played for the Soviet Union team that went to the semifinals of the 1966 World Cup.

Ponmarev said this year's Confederations Cup will show whether Russia is ready to compete with the stronger teams in next year's World Cup.

The championship game of the Confederations Cup will be played on Sunday, July 2 in Saint Petersburg.

Dan Friedell wrote this story for VOA Learning English with material from VOANews. Hai Do was the editor.

Who do you think will win the Confederations Cup? We want to know. Write to us in the Comments Section or on 51VOA.COM.

host – n. a person or organization who is organizing an event