Confusion over How to Deal with the Virus

Update Required To play the media you will need to either update your browser to a recent version or update your Flash plugin.
By Hai Do
12 June 2020


Can you spread the new coronavirus if you do not feel sick? Do you need to wear a nose and mouth cover, or mask, to stop the spread of COVID-19?

Health experts have debated these issues since late December, when spread of a new coronavirus was first reported. 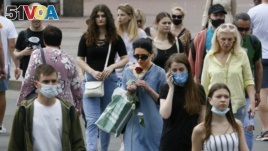 A woman sniffs a red rose as she walks, surrounded by people, some of them still in masks to protect against coronavirus, in downtown Kyiv, Ukraine, Tuesday, June 9, 2020. (AP Photo/Efrem Lukatsky)

For months, the World Health Organization, or WHO, advised people not to wear masks. Other health organizations and governments, however, advised the opposite.

Last week, the WHO changed its mask advice for the general public. The health agency said that people should wear cloth masks in public situations under some conditions. For example, masks are advised when a person cannot stay a safe distance from other people. The WHO said people over the age of 60 should also wear masks in public. And the organization advised people with health conditions, like diabetes and heart disease, to wear masks.

Part of the reasoning, the experts said, was to prevent spread by people who have the virus but are asymptomatic. That means they do not show signs of disease.

However, at a recent press conference, a COVID-19, WHO expert questioned this kind of spread. Maria Van Kerkhove told the group that data suggests spread by asymptomatic individuals is "very rare."

"We don't actually have that answer yet," she said.

Van Kerkhove said in her earlier comments she was speaking about several small studies of asymptomatic spread. She noted that there are some estimates that 40 percent of worldwide spread is the result of asymptomatic passage. "But," she said, "those are from models, so I didn't include that in my answer yesterday..."

Still, many other scientists were shocked by the description of asymptomatic spread as "rare." They say there is much evidence that people can spread the disease before showing signs of sickness.

Ivo Vlaev is professor of behavioral science at the University of Warwick in Britain. He said the release of conflicting information about the disease is a problem.

"If you are giving them confusing messages or they're not convinced about why they should do something, like wear masks, they will just ignore you," he said.

Today, there are more than seven million confirmed cases of COVID-19. Here are answers to some questions about the latest COVID-19 guidelines.

Can people who do not feel sick spread COVID-19?

The WHO has said for months that the majority of COVID-19 spread is from people with disease signs, like a fever or cough. Agency officials also said that viral spread by people who do not feel sick was not considered a major driver of the disease.

But, the WHO's emergencies chief, Dr. Michael Ryan, clarified this week that both "symptomatic and asymptomatic" people can spread the disease.

Does wearing a mask help?

Wearing a mask might not completely protect you from the virus as it can enter the body through the eyes. However, health experts believe mask use helps prevent wearers from spreading the virus if they are infected.

While most spread is thought to happen by coughing and sneezing, Ryan said there is some suggestion that even singing or shouting could spread the virus.

Why are we still not sure?

The virus was first documented in December. The disease is still new to science.

Some scientists say how the WHO identifies asymptomatic and pre-symptomatic cases is part of the problem.

While truly asymptomatic people are likely not responsible for much virus spread, several studies show that pre-symptomatic people spread the disease. Some experts argue that recognizing and stopping this kind of spread is critical to controlling the crisis.

More research is needed. Few detailed studies and tests have been done of asymptomatic people and their possible link to disease spread. Some limited studies have suggested people can spread the virus before they show symptoms. The WHO has largely dismissed that research, however.

Babak Javid is an infectious diseases doctor at Britain's Cambridge University Hospital. He said the WHO should publish its information to show why passage of the disease in people without symptoms is "rare."

Hai Do adpated this story for Learning English based on Associated Press news reports. Caty Weaver was the editor.

convinced - adj. completely certain or sure about something

sneeze - v. to suddenly force air out through your nose and mouth