Congo to Ban Log Exports to Reduce Pressure on its Forests

Update Required To play the media you will need to either update your browser to a recent version or update your Flash plugin.
By Gregory Stachel
02 November 2021


The Democratic Republic of Congo's environment minister said on Thursday the country plans to ban all log exports. The country also plans to take measures to lessen threats to its tropical rainforest. The forest takes in carbon dioxide and produces oxygen. It is a major move to fight climate change.

Congo is home to the majority of the world's second-largest rainforest. The country is under pressure to improve how it administers the forest.

It is also under pressure to slow down the high rate at which the forest is being destroyed, or deforested. Information from the U.N. shows the deforestation rate has doubled in the last ten years.

Eve Bazaiba is the environment minister. She announced the suspension of log exports to reporters in the capital Kinshasa. She did not say when it would come into effect.

"It allows us not only to enable natural restoration but also a reforestation program that we have with all of our technical, financial, and development partners," she said.

Information from the Central African Forest Initiative shows the Congo Basin rainforest removes 4 percent of carbon dioxide that humans put into the atmosphere around the world each year. About 60 percent of the rainforest is in Congo. 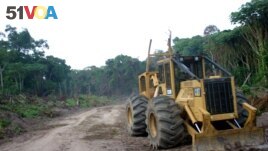 A logging company's machinery sits on the side of a road that has been cut into Congo's forest in the northern province of Equateur on October 8, 2004. (REUTERS/David Lewis/File Photo)

Bazaiba also has a plan, however, to remove a temporary ban on new industrial logging, which would give land to logging companies to remove trees. This plan has caused concern in environmental groups and scientists. They have warned of serious environmental, social, and climatic harm.

Bazaiba has said in the past that the temporary ban has not been able to stop the spread of illegal logging.

More than 24 scientists have urged those who financially support the Democratic Republic of Congo's forests industry to suspend financing if the government goes ahead with this plan.

But some scientists and other groups support the measure.

The European Union's ambassador to Congo has shown openness to the government's plan. They said earlier this month that it represented a "desire to regain control" of the forests.

Earlier in October, President Felix Tshisekedi ordered an inspection into all existing logging contracts, or legal agreements. He was trying to gain more order in the poorly administered industry.

"We don't want any more contracts with partners who came to savagely cut our forests, we will retire these types of contracts," Bazaiba said.

Forest Trends is an American organization that works to save forest land. In 2018, it found that Congo's biggest markets for wood products were Vietnam, the European Union and the European Free Trade Association, and China.

Hereward Holland reported this story for Reuters. Gregory Stachel adapted it for VOA Learning English. Susan Shand was the editor.

log – n. a long, heavy section of a tree that has fallen or been cut down

restoration – n. the act or process of returning something to its original condition by repairing it, cleaning it, or other acts

type – n. a particular kind or group of things or people