Update Required To play the media you will need to either update your browser to a recent version or update your Flash plugin.
By Gregory Stachel
09 January 2023


Near the edges of Lake Kivu in eastern Democratic Republic of the Congo, artist Patrick Cikuru Cirimwami walks knee-deep through a mountain of plastic bottles. He gathers as many as he can carry into a large container.

There is no public waste collection in the area. And the waste that goes into Lake Kivu often causes breakdowns in the hydroelectric plant, leading to power cuts.

But Cikuru Cirimwami's goal is bigger than helping clean up. Later he will melt down the plastic to make a thick liquid that he uses to paint pictures of politicians. The aim is to criticize the politicians for — what he says — is their inaction in protecting the environment. 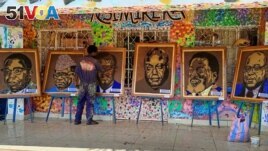 "There have been many conferences in DR Congo, many meetings...but we have not taken measures to protect nature. As a Congolese artist, I can send a message," said the 26-year-old.

Recently, the artist's pictures of politicians were shown at a cultural center in his hometown, Bukavu. They included independence leader Patrice Lumumba to current president Felix Tshisekedi.

Congo says it has a right to develop its economy by exploiting its large amount of natural resources. It has come under criticism for selling oil exploration rights in the world's second-biggest rainforest.

The country says it aims to reduce the possibility of any great destruction effects by using modern drilling methods and restrictive laws. It also hosted talks before November's United Nations meeting known as COP 27 in Egypt on ways to prevent an increase in the Earth's average temperature. It called on rich nations to follow a promise to developing nations to ensure fair financial assistance to fight changes to the Earth's climate.

knee – n. the joint that bends at the middle of your leg

plant –n. a building or factory were something is made or produced

exploit – v. to get value or use from (something)

host –v. to serve as a person or group with the responsibility to hold and supervise an event that includes guests and visitors