Update Required To play the media you will need to either update your browser to a recent version or update your Flash plugin.
By Pete Musto
03 November, 2017

The U.S. Congress is investigating how Russia used the companies' internet services to spread disinformation during the election. Congress also asked how the companies planned to stop the misuse of their services in the future.

The reports claim Russian government agents spent as much as $100,000 on Facebook advertisements.

"You must do better to protect the American people and...all of your users from this kind of manipulation," Burr said.

Senator Dianne Feinstein of California argued that social media companies are responsible for the material placed on their websites.

Fienstein expressed anger over the reports and suggested that lawmakers may take action.

She said, "You've created these platforms, and now they are being misused. And you have to be the ones to do something about it – or we will." 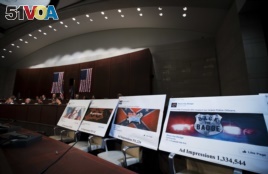 Facebook advertisements linked to a Russian effort to disrupt the American political process are shown.

Facebook, Instagram and Twitter identified some of the material that has been connected to Russian agents. Democratic Party members on the House Intelligence Committee showed examples of this material during the hearings.

The advertisements, videos and tweets covered topics including race, immigration, Islam, and issues of sexual identity.

Facebook, Twitter and Google have admitted that agents connected to Russia used false accounts on their sites throughout 2015 and 2016.

Lawyers for all three companies stated that they take the problem seriously and are aggressively fighting it.

Sean Edgett, a lawyer for Twitter, repeated a statement he made to the Senate Judiciary Committee one day earlier. He said the company has studied all the posts on its site from September 1 to November 15, 2016. Edgett said Twitter has suspended 2,752 accounts suspected of Russian links.

Colin Stretch said that false advertisements "were a very small fraction of the overall content on Facebook.

He said, however, that the company was taking measures to improve. "We're hiring more ad reviewers, doubling or more our security engineering efforts, putting in place tighter content restrictions," he said. Stretch added that buyers of political ads would have to provide documentation about themselves.

The House Select Committee also met on the issue

A few hours after meeting with the Senate Intelligence Committee, the companies' lawyers met with the House Select Committee on Intelligence to discuss the same issue.

Republicans on that committee mainly discussed information from the websites showing when the Russian disinformation efforts began.

The information showed that these efforts started before the Republican Party nominated Donald Trump as its presidential candidate.

Senator James Risch of Idaho said, "This is a whole lot broader than simply the 2016 election.

Google's lawyer Kent Walker agreed. He said, "The large majority of the material we saw was socially divisive rather than electoral advocacy." 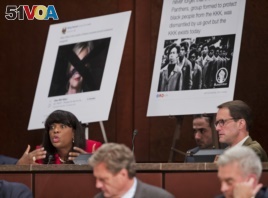 Some Democrats also accused the technology businesses of being slow to recognize and combat the threat.

Senator Mark Warner of Virginia said the big social media companies have a lot of information about Americans. "And the idea that you had no idea that any of this was happening strains my credibility," he said.

Both the House and Senate intelligence committees are holding yearlong investigations into Russian interference in the 2016 election. Reports from both are expected at a future date.

Members of both parties in the Senate have introduced legislation to deal with the problem. The bills would require internet-based services to confirm and make public the identities of those buying political advertising. U.S. broadcasters are already required to do that.

How should governments hold internet-based services responsible for the material users post on their sites? Write to us in the Comments Section or on 51VOA.COM.

disinformation – n. false information that is given to people in order to make them believe something or to hide the truth

agent(s) – n. a person who tries to get secret information about another country, government

manipulation – n. the act of controlling someone or something in a clever and usually unfair or selfish way

platform(s) – n. something that allows someone to tell a large number of people about an idea or product

fraction – n. a part or amount of something

content – n. the ideas, facts, or images that are in a book, article, speech, movie or website

advocacy – n. the act or process of supporting a cause or proposal

strain(s) – v. to cause problems or trouble for something

credibility – n. the quality of being believed or accepted as true, real, or honest