Update Required To play the media you will need to either update your browser to a recent version or update your Flash plugin.
By VOA
03 May, 2015

A policy dispute is taking shape in Washington over a government agency that helps exporters. On one side is the American business community. On the other side are conservative Republican Party lawmakers. Unless Congress takes action, the Export-Import Bank of the United States could be forced to stop accepting new customers at the end of June.

W.S. Darley and Company is a 108-year-old family business. It makes fire trucks in the United States, and sells them all over the world. 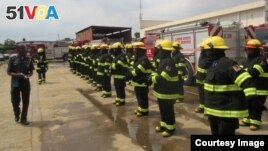 The Export-Import Bank provides loans or other assistance to buyers of U.S. products. Peter Darley is Darley's Chief Executive Officer.

"They (the customers) can spread their payments out over a period of time, makes it more affordable."

Business leaders and officials say small companies making products from pickles to ice cream have received help from the Export-Import Bank. The bank's supporters recently met in Washington. They say U.S. exports would slow without help from the government agency. And that, they say, would hurt economic growth.

The Export-Import Bank also provides help to big companies. The aircraft maker Boeing receives help from the bank. Boeing says it would have to move some of its manufacturing jobs overseas without the help it receives.

But Delta Airlines has a different opinion about the government agency. Delta says the bank has helped foreign customers buy airplanes from Boeing at a lower cost than it can. The airline company says that hurts its profits and U.S. aviation jobs.

Delta's concerns are one reason for planned hearings next month in the U.S. Senate. This week, the House of Representatives' Financial Services Committee held hearings. Texas Congressman Jeb Hensarling is a Republican and chairman of the committee. Before the hearing, he said big companies get the majority of the bank's assistance.

"The smarter and fairer way to promote American exports is by fundamental tax reform, strong trade agreements, a regulatory freeze with the exception of health and safety, and greater American energy independence with projects like the keystone pipeline."

But supporters argue that the Export-Import Bank provides important help when competing with government-supported foreign companies. The head of the bank, Fred Hochberg, says his agency helps both large and small U.S. businesses.

"Companies come to us and say we either have to meet the competition, because foreign governments are supporting our competitors, or we are selling in a market where conventional financing is simply not available."

Fred Hochberg says he is hopeful the Export-Import Bank will survive. He notes that 60 nations, including China and India, have similar agencies to support their exports.

VOA's Jim Randle reported this story from Washington. Mario Ritter adapted it for Learning English. George Grow was the editor.

customers – n. someone who buys good or services from a business

conventional – adj. used and accepted by most people

competition – n. the act of trying to do as well or better than others

Is it fair to support exporting companies? Let us know in the comments section below.