From VOA Learning English, welcome to As It Is! I'm Mario Ritter. Today, we hear about the budget debate in Washington.

"The first order of business must be to pass a sensible budget..."

President Obama is urging Congress not to delay action on legislation to finance government operations. But some lawmakers oppose America's new health care law enough to do just that.

This week also marks five years since the worst financial crisis in a generation. Later we lighten up. Young business owners are making a profit with stores on wheels. We will hear about the upside of going mobile.

The Budget Debate Marches Toward Another Time Limit

In Washington, financial and economic issues are gaining urgency as October 1st nears. That is when the federal government begins its new fiscal, or financial, year. On Monday, President Obama called for a budget agreement between Democratic and Republican Party lawmakers. Yet budget cuts and political disputes over the new health care law threaten delays.

Currently, the government is operating under automatically enacted budget cuts, known as sequestration. In addition, the government may not have enough to pay for all government operations in the new fiscal year unless Congress approves more money.

Lawmakers extended earlier time limits for reaching a budget agreement in the past. However, on Monday, the president linked passage of a budget to economic growth and job creation.

"If Congress is serious about wanting to grow the economy faster and creating jobs faster, the first order of business must be to pass a sensible budget that replaces the sequester with a balanced plan that is both fiscally sound and funds the investments like education and basic research and infrastructure that we need to grow." 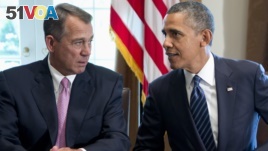 President Barack Obama talks with House Speaker John Boehner of Ohio earlier this month.
One of the main disputes involves the Affordable Care Act of 2010. Many Republicans are seeking to cancel the law, which some Americans have called Obamacare. The legislation is meant to reduce health care costs. The president and Democrats support the law. Republicans, however, say it hurts job creation and the economy. House Speaker John Boehner, a Republican from Ohio, says efforts to cancel the law are continuing.

"We are again taking steps to dismantle the president health care law, which is driving up the costs of health care, and making it harder for businesses to hire new workers."

Some Democrats says the business of Congress is being blocked because of the narrow political causes of a few conservative lawmakers. They say the health care law was a major issue during the 2012 presidential elections, and that President Obama was the winner. 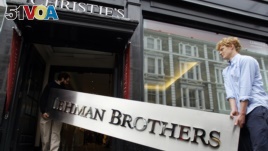 Many believe the failure of the investment bank Lehman Brothers in Septemeber of 2008 marked the start of the world financial crisis.
The October 1st deadline has brought attention to the budget battle in Congress. But this week also offers a chance to look back at hard economic times. Monday was the fifth anniversary of the collapse of a huge investment bank, Lehman Brothers. Many people consider the bankruptcy of Lehman Brothers the beginning of the world financial crisis.

Late Sunday, the Obama administration released a report on the crisis. It presented the administration's steps to answer the collapse of financial markets and institutions. At one time, job losses reached a monthly average of 800,000. And, at the worst point of the crisis, the economy was shrinking at a yearly rate of over eight percent.

Congress passed the American Recovery and Reinvestment Act of 2009 during President Obama's first 30 days in office. That law offered almost $800 billion dollars in loans and aid to businesses and individuals.

The government also moved to offer emergency loans to major banks and two of the three major American carmakers: General Motors and Chrysler.

Yet, the effects of the financial crisis remain. The administration's report notes that the value of Americans' property and investments fell by $19 trillion during the recession after the crisis. It says 91 percent of that has been regained.

The United States central bank has kept the interest rates it controls low and bought bonds in an effort to support the economy since 2008. Earlier this year, the Federal Reserve suggested that the economy may be strong enough to permit a reduction in its support activities.

The cost of opening a store in New York and other American cities is too high for many people who would like to start a business. But, across the country, a new way of launching a business is taking shape -- on four wheels. Jim Tedder has our story.

Jessie Goldenberg borrowed money to create a fashionable store in the back of an old delivery truck. She says being able to drive her store from place to place helps to keep business costs down. Most of all, she avoids having to make costly rental payments. 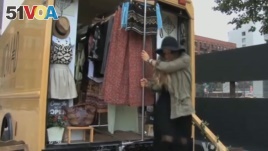 Jessie Goldenberg unloads goods from her mobile store.
Goldenberg: "It's all, it's skyrocketing. It was unaffordable for me as a young business owner to start a boutique that was in a brick and mortar store in the city and pay the rents."

Her business, ‘Nomad Boutique', sells clothing and jewelry, mostly from local designers who make one-of-a-kind products. This year, Jessie Goldenberg earned a profit. She explains the increase in business to having created a new experience for shoppers.

"Oh, that looks great on you!"

"I think the intimacy is different, you know, the experience, you know, we're here, it's their lunch break. We're right outside their door they can come in".

She is part of a growing number of young business owners who bring their products to buyers. Sometimes the shopper has more than two legs. With Love Ivan is traveling shop for dogs. It is named after Dina Del Russo's pet dog, Ivan. Her store is filled with treats for dogs. It travels between New York and New Jersey every day.

She says her business got started because of a stomach problem.

"My dog had some sensitivities to chicken. So I started making my own treats for him. My neighbor, who is a dog walker, asked me if I could make some pupcakes for a dog she walked and have a birthday party for him. So I did. And then from there I just started making different treats for different people and, I thought why not get a truck and be like the ice cream man for dogs".

"I made them with human grade organic ingredients."

She keeps costs down by having only a small number of products.

"I thought why not be mobile. I can be anywhere. If it doesn't work in one spot, I can easily move to another. That's kind of how it started".

Ivan is her taste tester.

"So this is carrot and oat, and this has a beef liver treat on top. This is peanut butter and bacon cookie".

Ms. Del Russo adds that, in the near future, there will be more With Love, Ivan trucks on the road.

And that's our show for today. Join us tomorrow for another As It Is from VOA Learning English.
Related Articles
go top