Congressman Shot on Baseball Field Has Friends in Both Parties

Update Required To play the media you will need to either update your browser to a recent version or update your Flash plugin.
By Bruce Alpert
16 June, 2017


Steve Scalise, the congressman who was shot Wednesday as he played baseball, has a difficult job.

Scalise is the majority whip in the United States House of Representatives. The job requires him to ask Republican members of Congress to vote the way House leaders want, even when they do not want to.

"Steve has a way of doing that without upsetting people," said Congressman Garret Graves. 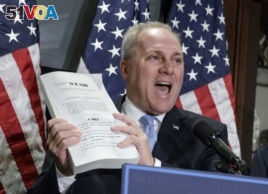 Graves, like Scalise, is a Republican from the southern state of Louisiana.

"Steve just has one of those personalities that is very attractive," Graves said. "He likes to use humor, likes to laugh, and he comes across as not very threatening. People like him and that makes him very effective."

Scalise, age 51, loves playing baseball and actively supports the Louisiana State University (or LSU) football team. He attended LSU as a student – long before he started working in the U.S. Capitol building.

His office was once used by Abraham Lincoln, before Lincoln became the country's 16th president. Today it has pictures of Scalise playing in baseball games between Republican and Democratic lawmakers.

The congressman was in training with other Republicans Wednesday morning for this year's congressional game when a gunman shot him and three other people.

Police have identified the shooter as James Hodgkinson of Illinois. Hodgkinson died after he was shot by Capitol security officers. Officials say he wrote angry comments about President Donald Trump and other Republicans on social media.

Scalise was in critical condition Thursday night at MedStar Washington Hospital Center after doctors operated on him for the second time. The hospital center said his condition had improved over the past 24 hours, but that he would need more operations and "will be in the hospital for some time."

Scalise represents a conservative district in Louisiana. Many people there voted for Trump in the 2016 presidential election. Scalise opposed President Barack Obama, a Democrat, and his health care and environmental positions.

Scalise praised Trump for announcing on June 1 that the United States would pull out of the Paris climate change agreement. He said Trump's decision is in keeping with his campaign promise to put American workers first.

Henry Waxman is a Democrat and a former Congressman. He once served with Scalise on the House Energy and Commerce Committee. They often argued about environmental regulations.

Waxman supported strong rules as the only way to prevent rising sea levels and more powerful storms, two events linked to rising temperatures. Scalise said such rules were "radical," and threatened the jobs of Louisiana's oil and gas workers.

But Scalise and Waxman were friends.

After a committee meeting, Waxman told a reporter he and Scalise often spent time together talking about their two most important concerns. For Scalise, it was his two children. For Waxman, his grandchildren. The two would show off photographs of "their kids" on the floor of the House of Representatives, Waxman said.

Garrett Graves said Scalise has friends in both political parties.

Too many angry words

But the Louisiana congressman said relations between Republicans and Democrats, liberals and conservatives, have grown too divisive.

The shooting on Wednesday by a man angry at Trump and Republicans should be a lesson for both parties to stop the angry words, Graves said.

"Verbal attacks" and divisions have reached "unhealthy levels in government," he added.

"I apologize for any contribution I may have caused," Graves said.

Cedric Richmond is another Louisiana congressman. Richmond, a Democrat, is head of the Congressional Black Caucus. He considers Scalise a close friend.

"Don't get me wrong," Richmond said. "There are a bunch of issues we fight about and we fight passionately about. But when we're done fighting about the issues we try to find ways we can work together."

Richmond was the winning pitcher in the congressional baseball game Thursday night. The Democrats defeated the Republicans 11-2, before a record crowd of nearly 25,000 people.

Capitol police officer David Bailey threw out the ceremonial first pitch before the game. Bailey was one of two officers injured in the shooting. He and fellow officer Crystal Griner were credited with saving many lives.

On Thursday, all the players wore baseball hats from LSU in honor of Scalise. Richmond said Scalise would not have wanted the game cancelled because of the shooting. 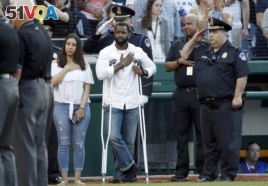 Bruce Alpert reported on this story for VOA Learning English. His report was based on stories from the Associated Press, Reuters and other sources. George Grow was the editor.

We want to hear from you. Write to us in the Comments Section and share your views on 51VOA.COM. Do you think divisions are too deep in the United States, or the country where you live?

attractive - adj. having a feature or quality that people like

radical - adj. having extreme political or social views that are not shared by most people

lesson – n. something learned through experience; part of a training program

caucus - n. a group of people with similar interests and concerns