Update Required To play the media you will need to either update your browser to a recent version or update your Flash plugin.
By Alice Bryant
25 November 2020


A project in Argentina is using a new model in animal conservation to grow the jaguar population in the country's northern forests. The conservation group Rewilding Argentina brought together a wild jaguar and a captive one for mating.

It is believed to be the first attempt of its kind.

Tania is the name of the female. She was raised in a zoo. The male is called Qaramta. Their relationship began last year in Argentina's Impenetrable National Park.

Almost all jaguars have disappeared from the area. But in late 2019, a jaguar pawprint was found in a dry riverbed. Project workers set up observation cameras and soon saw an adult male. During a brief capture, they attached an electronic tracking device to the cat. 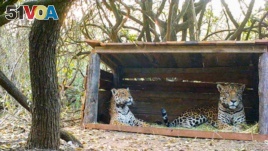 Tania and Qaramta sit together in the breeding area at Impenetrable National Park, in the Chaco Province, Argentina October 17, 2020. (Rewilding Argentina/Handout via REUTERS)

Then Tania, a mother already, was brought in on the job. She was placed in a special containment area at the park.

Over nine months, the jaguars developed a connection although physically separated by a fence. They moved closer to each other as the days passed. They began to nuzzle through the fence and exchange peaceful cat calls.

The behavior signaled that the two jaguars likely would not fight. So, Qaramta was let into Tania's area when she was ready for mating.

Tania and Qaramta spent a little less than a week together sleeping and playing and cleaning themselves. A hopeful yet worried group of researchers watched them, at least some of the time.

The project's field director, Marisi Lopez, said the team could not confirm mating happened because the animals went deep into the forest. But there seemed to be, she said, "very good chemistry between them."

Qaramta has returned to life on the other side of the fence. But he visits Tania almost every night. The project plans to fully reunite the cats once Tania is again ready to mate. Until then, she is being watched for signs of pregnancy.

Rewilding Argentina has bred captive jaguars in nearby Ibera National Park. They have also bred giant anteaters and bare-faced curassows.

Howard Quigley is Jaguar Program director for Panthera, an international wild cat conservation organization. He said usually the biggest issue is whether the animals will get along. "In zoos it's not uncommon to have a female or male killed in these encounters," he said.

But it appears that was not an issue for Tania and Qaramta.

"Hopefully, they now have a pregnant female who can be used for the next step," he said.

"You have to go a step further and bring back what's been lost. It's a somewhat desperate move" but there are really no other choices, he said. "We do this or we lose the jaguar."

In a worst-case situation, he said, Qaramta could be caught by hunters before he can get Tania pregnant. In the best situation, the two animals will produce young.

Jaguars are the largest cat in the Americas. They have lost over half their traditional living areas. In Argentina's northern Chaco area, which is home to Impenetrable National Park, just 20 are thought to exist.

pawprint - n. the impression left by a clawed animal's foot

nuzzle - v. to gently push or rub your nose or face against (someone or something) to show affection

encounter - n. a meeting that is not planned or expected

desperate - adj. done with all of your strength or energy and with little hope of succeeding