Update Required To play the media you will need to either update your browser to a recent version or update your Flash plugin.
By Pete Musto
17 December, 2016


College professors are no strangers to politics. Political science professors teach at almost every university in the United States.

And like all of us, professors of each and every specialty have their own political opinions. Some keep their opinions to themselves. Others express them both in and outside the classroom.

But now, a new American website is seeking to identify and list professors it claims support extremist ideas. 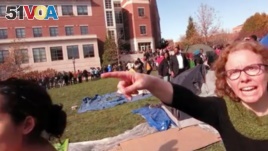 Melissa Click is listed on Professor Watchlist because she tried to prevent a student journalist from filming student protests at the University of Missouri in 2015.

The website, called Professor Watchlist, was launched in November. It is a project of Turning Point USA, a non-profit group that supports values such as limited government and free market economies. These values are often connected to American conservatives.

How does Turning Point decide which professors hold extremist beliefs? Matt Lamb is the director of Constitutional Enforcement and Transparency at the organization.

Lamb says he and others search for news stories about professors expressing beliefs he says are outside the American mainstream. By definition, mainstream means a direction of an activity or influence.

Most of the professors on the list are reported as having talked, written or taught about subjects related to the progressive movement. This includes support of gun control laws, the idea that human activities are to blame for climate change, and criticism of the free market system.

The Higher Education Research Institute operates through the University of California, Los Angeles. The group studies issues related to higher education. In 2014, it found that 60 percent of U.S. college professors identified themselves as liberal or politically left-leaning.

Lamb says conservative-thinking students often feel like they have to hide their political opinions from their professors and other students. He says many of the professors on the list try to silence conservative students in their classrooms. The aim of the website is to let students know which professors hold opposing beliefs.

Then students can either avoid taking classes with those professors or better prepare their own arguments against them, Lamb says.

"For example, if you're a pro-life student, you probably don't want to take a class with the professor at University of California Santa Barbara who punched a pro-life student and got 3 years' probation for it. It's probably something you're going to want to know going into a class. But for the most part, too, we also encourage other students, if they feel comfortable doing so, to push back and debate these ideas in classrooms."

Some critics have compared the website's list to the activities of former U.S. Senator Joseph McCarthy. During the 1950s, McCarthy tried to publicly identify American citizens that supported communist teachings. Many of the people he identified suffered damage to their public reputations and careers.

But Lamb rejects this comparison. He says Professor Watchlist does not investigate the private lives of professors. And, the information used to identify people named on the list is all publicly available.

The website lists some professors because of opinion pieces they wrote for newspapers or comments left on social media. If they did not want their beliefs made public, they should not speak about them publicly, Lambs says. Also, one-sided political arguments do not belong in the classroom, he adds.

Greg Hampikian is one of the over 150 professors on the list. He teaches genetics at Boise State University in Idaho. Hampikian is on the list because of an opinion piece he wrote for the New York Times in 2014. His piece is called "When May I Shoot a Student?" It used humor to express his criticism of a bill to let students carry guns on the grounds of Idaho colleges.

Hampikian says he fails to truly understand why he is on the list. He says he has voted for candidates from each of the two major American political parties in the past. And, he says, he is not very political.

"There are plenty of people who've given their lives to causes, who would be honored to be on this list. I think they're scratching their heads about why I'm listed on it. I am as well. But, so be it. My grandfather was sent to the gulag and I'm told died there for his political opinions. My other grandfather was tied to the railroad tracks in Egypt for his political editorials. And I thought, ‘I'm in America, I'm on a watch list? By whom?'"

Hampikian says he welcomes the opinions of conservative students. Being on the list has not yet brought him any harmful attention, he noted. But no one from Turning Point USA has ever contacted him. And that is a big part of the problem with the list, he says.

Without giving professors a chance to further explain their position, Hampikian says, the website risks taking comments out of context. This can often lead to misunderstanding and wrongful representation.

Dunn says he has never faced difficulties being part of the political minority on a college campus. He agrees professors should limit their support for one political belief over another during class, especially when teaching a non-political subject. But college is all about considering the value of opinions you disagree with, he says.

"If the goal is for student's to be able to avoid these professors, I'm not certain that that's a valuable goal. One of the best classes I ever took was from Richard Rorty, who I had profound disagreements with. But it was a fabulous class and I learned an immense amount from him ... In my case I would not have wanted to miss the opportunity to study under him because I was just trying to avoid people that disagreed with me."

Some conservatives worry that college professors with opposing ideas try to force students to follow their beliefs. But Dunn argues even if this were their goal, professors actually have little effect on changing students' opinions. Young people are much more likely to base their political beliefs on those of their friends, he says.

The U.S. Constitution protects the free speech rights of professors and the website organizers, says Susan Kruth. She is with the Foundation for Individual Rights in Education. Her foundation fights for academic freedom on college campuses.

Kruth says the history of lists like the one on Professor Watchlist is dark. But she adds that professors should accept criticism and debate.

The website does not support extreme harassment or try to punish professors for their beliefs, Kruth says. Unless it does so, the website remains a welcome part of political debate.

We want to hear from you. What types of political beliefs are the majority and minority at colleges in your country? Are there any similar lists of professors that you know of? Write to us in the Comments Section or on 51VOA.COM.

transparency – n. the quality that makes something obvious or easy to understand

left-leaning – adj. having or supporting ideas and policies that are associated with liberal, progressive or socialist groups

pro-life – adj. opposed to medical procedures used to end unwanted pregnancies and cause the death of the fetus

punch(ed) – v. to hit someone or something hard with your hand with its fingers bent down into the palm

probation – n. a situation or period of time in which a person who has committed a crime is allowed to stay out of prison if that person behaves well and does not commit another crime

encourage – v. to tell or advise someone to do something

communist – adj. believing in a way of organizing a society called Communism, in which the government owns the things that are used to make and transport products and there is no privately owned property

reputation(s) – n. the common opinion that people have about someone or something

gulag – n. one of many forced labor camps in Soviet Russia during the Stalin era, from the 1930s until the 1950s

source(s) – n. a person, book, or report that gives information

out of context – idm. without the surrounding words or circumstances and so not fully understandable

censorship – n. the system or practice of examining books, movies and letters in order to remove things that are considered to be offensive, immoral or harmful to society

harassment – n. to annoy or bother someone in a constant or repeated way