Update Required To play the media you will need to either update your browser to a recent version or update your Flash plugin.
By Alice Bryant
07 June, 2018


In a recent program, we told you about phrasal verbs related to food. The program centered on eating food: what, how much and when.

You will remember that a phrasal verb is a verb made of two or more words: a verb plus a preposition or adverb, or both.

Today, we'll discuss phrasal verbs we use to talk about cooking. If you watch television cooking programs in English, you have already heard some of these verbs. Many are used in recipes. Listen to a recipe for pasta sauce. There are seven phrasal verbs. Try to find them and think about their meanings:

Before you begin, thaw out the chicken for several hours. OK, let's get started. First, chop up the tomatoes, onions, garlic and mushrooms. Next, add these ingredients to a sauce pot with a little cooking oil and put it on medium heat for about one minute. Then, mix in the chicken, spices and a little salt. Let the mixture cook until the chicken is golden – about seven minutes. Next, add two large cans of crushed tomatoes. Cover the pot. Then, turn down the heat. Otherwise, the sauce may boil over. Let it cook for about 20 minutes on low heat. Then, let it cool down before serving it over pasta with a little parmesan. And finally: Warm up your garlic bread to complete the meal.

Did you find the seven phrasal verbs?

The first one was thaw out. To thaw out means "to unfreeze." Listen to how this verb is used in the recipe:

Before you begin, thaw out the chicken for several hours.

Thaw out is separable. That means the object may go after the two-word verb, or it may appear in the middle of it. The object is the chicken. Now listen to the sentence with the object in the middle:

Before you begin, thaw the chicken out for several hours.

Our next verb is chop up, which is also separable. To chop up means "to cut something into small pieces." Today's recipe involves chopping up vegetables. Listen:

First, chop up the tomatoes, onions, garlic and mushrooms.

You could also say it with up after the object.

First, chop the tomatoes, onions, garlic and mushrooms up.

But, it is easier to understand if you do not separate chop and up when the object is a list of things.

Mix in is another separable phrasal verb. To mix in means "to add one substance to others, especially in cooking." Here's how the recipe uses the verb:

Then, mix in the chicken, spices and a little salt.

Again, we are less likely to separate the verb because the object is a list of things.

Now, let's talk about turn down. In cooking, to turn down means "to lower the temperature of the heat used to cook food." Here's how the recipe uses the verb:

Then, turn down the heat.

Since the verb is separable, you can also say it this way:

Then, turn the heat down. 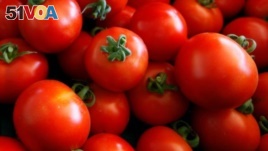 Tomatoes are the main ingredient in many traditional pasta sauces.

Next, we have boil over – one of today's easier verbs, as it does not take an object. To boil over means "to flow over the side of a container while boiling." Listen to how the recipe uses this verb and notice that it appears at the end of the sentence:

Otherwise, the sauce may boil over.

Hmm...has your cooking ever boiled over? Mine has.

Ok, let's talk about cool down. In relation to food, the verb means "to permit hot food to become cool enough to eat." In recipes, we often use cool down with the verb let. So, the sentence structure is a little different. Listen:

Then, let it cool down before serving it over pasta with a little parmesan.

The verb let is a causative verb. These verbs cause something to happen. After the causative verb let, we use the simple form of verbs rather than their infinitives. Notice, in our recipe, that we said, "Let it cool down," not "Let it to cool down."

Our final phrasal verb for today is warm up, another separable verb. To warm up means "to reheat a food to a desired temperature." Here's how the recipe uses this verb:

And finally: Warm up your garlic bread to complete the meal.

Now that you know how separable phrasal verbs work, try writing this last example with the object – your garlic bread – in the middle of the verb.

Do you have a recipe you'd like to share? Write to us in the comments section using at least three of the verbs you learned today.

pasta – n. a food made from a mixture of flour, water, and sometimes eggs that is formed into different shapes and usually boiled

sauce – n. a fluid dressing or topping for food

onion – n. a round vegetable that is usually white, yellow, or red and has a strong smell and taste

garlic – n. a plant that has small sections which have a strong taste and smell and are used for flavoring foods

mushroom – n. a fungus that is shaped like an umbrella

ingredient – n. one of the things that are used to make a food or product

spice – n. a substance that is used in cooking to add flavor to food, comes from a dried plant, and is usually a powder or seed