Cooling, Drying Climate May Have Led to Neanderthal Disappearance

Update Required To play the media you will need to either update your browser to a recent version or update your Flash plugin.
By Pete Musto
02 September, 2018


A new study suggests that ancient periods of cold and dry climate helped our species take the place of Neanderthals in Europe.

Researchers found that such cold periods happened at the same time Neanderthals seemed to disappear in different parts of the continent. Their disappearance was followed by the appearance of our species: Homo sapiens.

Neanderthals are a species of early humans that once lived in Europe and Asia. The species died out about 40,000 years ago. Homo sapiens arrived in Europe a few thousand years later. 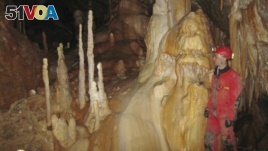 In this 2013 photo provided by Bogdan Onac, researcher Vasile Ersek stands in the Ascunsa Cave in Romania. Scientists say ancient shifts in climate helped our species replace Neanderthals in Europe. Researchers used data from this cave and another to document two lengthy cold and dry periods. (Bogdan Onac via AP)

Scientists have long debated what happened. Some have blamed the change in climate. Others have proposed explanations including the sudden spread of diseases and the idea that newcomers competed with the Neanderthals for resources.

Michael Staubwasser is a scientist with the University of Cologne in Germany. He and his research team reported their findings in late August in the Proceedings of the National Academy of Sciences. The researchers examined existing climate, archaeological and ecological data and added new measurements of ancient climate. Those measurements came from two caves in Romania.

"Whether they moved or died out, we can't tell," Staubwasser told the Associated Press.

During the two events, signs of Homo sapiens appear in sites within the Danube River Valley in central and Eastern Europe and in France, the team noted.

The changes in climate would have turned forests into grassland filled with small plants. Homo sapiens may have been better adapted to that new environment than the Neanderthals were. So they may been able to move in after Neanderthals disappeared, the researchers wrote.

Katerina Harvati is a Neanderthal expert at the University of Tuebingen in Germany. She was not involved in the study. She said it is helpful to have the new climate data from southeastern Europe. That is an area that many researchers think Homo sapiens used to spread through the continent.

But Harvati said it is unclear whether Neanderthals disappeared and Homo sapiens appeared at the times the researchers claim. She said that is because the studies they base their findings on depend on limited evidence and are sometimes disputed.

Chris Stringer is with the Natural History Museum in London. He said he thought the paper made a good case for the effect changes in climate had on Neanderthals. Yet he believes other things also led to their disappearance.

Rick Potts of the Smithsonian Institution called the study "a refreshing new look" at how one species took the other's place.

"As has been said before, our species didn't outsmart the Neanderthals," Potts wrote. "We simply out-survived them."

Malcolm Ritter reported this story for the Associated Press. Pete Musto adapted it for VOA Learning English. Ashley Thompson was the editor. We want to hear from you. How important do you think climate change is for both the past and future of our species? Write to us in the Comments Section or on 51VOA.COM.

archaeological – adj. related to the science that deals with past human life and activities by studying the bones and tools of ancient people

ecological – adj. related to the science that deals with the relationships between groups of living things and their environments

cave(s) – n. a large hole that was formed by natural processes in the side of a cliff or hill or under the ground

adapt(ed) – v. to change your behavior so that it is easier to live in a particular place or situation

outsmart – v. to defeat or trick someone by being more intelligent or clever

out-survive(d) – v. to remain alive or in existence for longer or more effectively than others