Update Required To play the media you will need to either update your browser to a recent version or update your Flash plugin.
By VOA
30 November, 2015


Climate change on the Agenda

The hashtag #COP21 started trending over the weekend ahead of the United Nations' conference on climate change.

It stands for the 21st Conference of the Parties to the United Nations Framework Convention on Climate Change.

Xi called the summit "a new starting point." Obama said, "Our generation may not even live to see the full realization of what we do here." 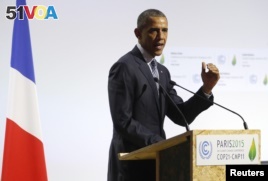 But it's a tweet from outer space that has received all the attention. American astronaut Scott Kelly wrote, "From space, we are privileged to see the beauty of Earth, but also our impact on its environment."

The tweet was liked over 4,000 times in seven hours.

Bryant was a teenager when he entered the NBA draft straight out of high school. He won five NBA titles with the Los Angeles Lakers. He even scored 81 points in one game in 2006 – the second-highest single-game total ever.

On Sunday night, Bryant announced he would retire at the end of this season. Bryant made the announcement with a poem on the website The Players' Tribune.

Bryant wrote, "This season is all I have left to give. My heart can take the pounding. My mind can handle the grind. But my body knows it's time to say goodbye."

By Monday morning in the U.S., the word "Kobe" was the subject of over one million tweets.

Bryant will retire after 20 seasons in the league. He missed almost all of the last two seasons due to major injuries. Bryant will finish his career with the third-most career points in NBA history.

This is the time of year retail businesses in the U.S. look to start making money. Businesses offer customers discounts and incentives to make them come to stores and shop.

The day after Thanksgiving is called "Black Friday." It refers to the first time all year businesses are "in the black" or making profit.

With more businesses selling their goods online, the Monday after Thanksgiving has the name "Cyber Monday." There were over two million Google searches with the term "Cyber Monday" on Sunday alone for discounts on computers, clothes and shoes.

Perhaps some businesses hyped the big day too much. Target's website could not handle the traffic and had to slow down.

Some users got the message "So sorry, but high traffic's causing delays."

The website CNBC.com said PayPal had trouble keeping up with demand, too.

Does your country have a good plan for climate change? Do you think we can make a difference today for future generations? We want to hear from you. Write to us in the Comments section or on 51VOA.COM.

grab – v. to get the attention or interest of (someone or something)

hype – v. to talk or write about (something or someone) in a way that is intended to make people excited or interested