Update Required To play the media you will need to either update your browser to a recent version or update your Flash plugin.
By Susan Shand
08 April 2020


The new coronavirus COVID-19 made Dr. Jag Singh a patient at his own hospital.

A lung infection made it difficult for him to breathe. His doctors at Massachusetts General said he needed to make a decision about life support while in intensive care.

Then, they offered him a chance to test remdesivir. The experimental drug has had some good results when used against other coronaviruses. Singh, a heart specialist, said ‘yes' immediately. 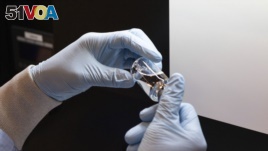 In this March 2020 image provided by Gilead Sciences, a container of the investigational drug remdesivir is visually examined at a Gilead manufacturing site in the United States. (Gilead Sciences via AP)

COVID-19 patients around the world have been joining remdesivir studies in the past few weeks.

The interest has been so great that the U.S. National Institutes of Health (NIH) is expanding its study. It has nearly reached its first goal of 440 patients. The California company Gilead Sciences makes the drug. It is increasing its own studies too.

"I would enroll my family" immediately, said Dr. Libby Hohmann. She placed Singh and nearly 30 other patients in the NIH study at Massachusetts General.

For most people, COVID-19 causes moderate symptoms. Some patients, however, get a lung infection which requires hospitalization. The risk of death is greater for older people and those with other health problems.

The drug remdesivir has been used in animal testing against two similar coronaviruses, SARS and MERS. The drug helped prevent infection and reduced the symptoms if it was taken early. The testing is farther along than other possible drugs and may lead to government approval for treatment.

The drug-maker Gilead has given remdesivir to more than 1,700 patients. Its chief executive Dan O'Day wrote that many people have asked for the drug but the company is "taking the ethical, responsible approach." He said more people will be helped if studies prove the drug to be safe and effective.

O'Day said his company has drug treatment for more than 140,000 patients. It is providing the drug for free for now. It has set a goal of making treatments for 500,000 patients by October and more than a million by the end of the year.

Gilead also gave remdesivir to China for two studies expected to have results by the end of the month. Other studies have begun in Asia and Europe.

"There's so much anxiety about the disease that the patients are quite interested" and no one offered the chance has refused, said Dr. Arun Sanyal. He is the study leader at Virginia Commonwealth University in Richmond.

The NIH study, however, is the most rigorous of all the tests. It compares remdesivir to placebos, and neither patients nor doctors know who is getting what until the end of the study.

enroll – v. to join or to take part in something

anxiety – n. fear or nervousness about what may happen

rigorous – adj. doing something with a lot of interest and strength

placebo– n. a pill or substance that is given to a patient like a drug but that has no physical effect on the patient