Coronavirus Survivor: 'In My Blood There May Be Answers'

Update Required To play the media you will need to either update your browser to a recent version or update your Flash plugin.
By Susan Shand
06 April 2020


Tiffany Pinckney remembers the fear she felt when the coronavirus she suffered from made it very difficult to breathe. So, when she recovered, the New York City woman became one of the country's first survivors to donate her blood. That blood may now help other seriously ill patients.

Pinckney told the Associated Press it was "overwhelming to know that in my blood, there may be answers." 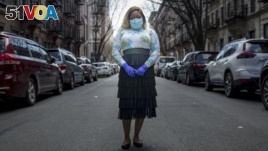 Tiffany Pinckney poses for a portrait in the Harlem neighborhood of New York on April 1, 2020. Pinckney became one of the nations first donors of "convalescent plasma." (AP Photo/Marshall Ritzell)

Doctors around the world are reusing a treatment for infections that is about 100 years old: giving blood plasma from recovered patients to sick ones. Plasma is the yellowish liquid part of blood.

The blood from former patients is filled with immune molecules that can help survivors defeat COVID-19, the disease caused by the coronavirus.

Such donations have already been made by recovered patients in Houston and New York. Now, hospitals and blood centers in other areas are preparing for possibly hundreds of survivors to donate.

Doctors do not know if the treatments will be successful.

This is a "call to action," said Dr. David Reich. He is president of New York's Mount Sinai Hospital, which collected Tiffany Pinckney's blood.

"People feel very helpless in the face of this disease. And this is one thing that people can do to help their fellow human beings," he added.

The treatment was used during the 1918 flu pandemic. It was also used to fight several other infections before modern medicine found new anti-viral drugs.

During an infection, the body starts making antibodies designed to attack the germ that has invaded the body. These antibodies stay for months or years in the blood plasma of survivors.

This treatment can be used while scientists search for a vaccine or a new drug.

It is a temporary measure that can be put into place quickly, said Dr. Jeffrey Henderson. He is from Washington University School of Medicine in St. Louis. He is putting together a study about the treatment.

This "is not a cure...but rather it is a way to reduce the severity of illness," Henderson said. Doctors don't know how long survivors' antibodies will stay in their plasma.

Last week, the Food and Drug Administration told hospitals how to request emergency permission to use the treatment. Houston Methodist Hospital and Mount Sinai both asked immediately.

The public also answered requests from hospitals for donations.

Michigan State University had more than 1,000 people sign up for the National COVID-19 Convalescent Plasma Project. The group was formed by hospitals hoping to increase plasma donation for research.

Survivors who want to donate blood cannot just walk into a blood center. They must prove the virus is gone, and that they have been free of symptoms for several weeks. They also must have a high level of antibodies in their blood.

Chinese doctors reported last week that five people treated with plasma from former patients all began to improve a week later. But they also received other treatments, so there is no way to know if the plasma caused the improvements.

In a North Carolina factory, Spanish chemical company Grifols is trying to recreate a version of donor plasma that is filled with a large amount of antibodies.

Researchers at the National Institutes of Health are measuring survivors' antibody levels to learn how strong a vaccine must be. Other scientists, including some at Beijing's Tsinghua University, are trying to find out which antibodies are the strongest. They hope to copy those antibodies in a lab and create a drug treatment.

But donations from people like Pinckney could be used as fast as medical centers can process the blood. When Mount Sinai asked her to donate, she agreed immediately.

It's "hope for someone else," she said.

antibody– n. a substance produced in blood to fight disease

convalescent - adj. the process of becoming well after an illness

symptom– n. a physical feeling or problem that shows that someone has a particular illness