Costs of Goods, Services Increase around the World

Update Required To play the media you will need to either update your browser to a recent version or update your Flash plugin.
By Hai Do
14 October 2021


With coronavirus restrictions easing in some places, companies around the world are struggling to find workers, ships, parts and fuel. Such shortages have led to higher prices for goods and services and have threatened economic recovery.

In Britain, the nation's largest chicken producer warned that the 20-year period of cheap food prices is ending. The head of the producer said food prices will go much higher because of increasing costs for labor and supplies.

"The days when you could feed a family of four with a 3 pound ($4) chicken are coming to an end," said Ranjit Singh Boparan. He owns 2 Sisters Food Group in Britain.

In Japan, dairy products maker Meiji Holdings has increased prices of some products by up to 12.8 percent. It is the maker's first price increase since 2008. Other food companies have also raised prices on their main product lines for the first time in many years.

Yuka Urakawa has noticed the price changes in her country. She called the increases "terrible." She noted that people's earnings have not increased, and taxes are rising. "People are increasingly becoming poor," she said. 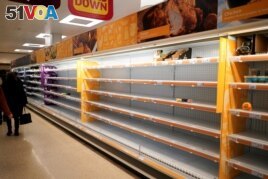 FILE - Shelves empty of fresh chicken in a supermarket, as the number of worldwide coronavirus cases continues to grow, in London, Britain, March 15, 2020. REUTERS/Henry Nicholls/File Photo

On Thursday, the Swedish central bank reported that inflation in the northern European country reached its highest level in more than 10 years. Similar reports came from Spain and Ireland.

Worker shortages are leading to major delays at ports in the United States. This week, President Joe Biden announced that workers at the California ports of Los Angeles and Long Beach will work around the clock to unload about 500,000 containers waiting on ships.

The average U.S. cost of a gallon of gasoline is now at a seven-year high. And the U.S. Energy Department expects winter fuel costs to go much higher. The Reuters news agency reported that the Biden administration has been speaking with U.S. oil and gas producers about helping to bring down fuel costs.

In China, shortages of coal, high fuel prices and increasing post-pandemic demand have led to a halt in production at factories supplying goods to the world.

The International Energy Agency wrote in its monthly oil report, "Higher energy prices are also adding to inflationary pressures that, along with power outages, could lead to lower industrial activity and a slowdown in the economic recovery."

The Dutch mapping software company TomTom reported Thursday that its sales dropped 21 percent in the third quarter of the year. It also warned that supply chain problems in the automobile industry could last until the first half of 2022. The company supplies its software to carmakers.

TomTom's Chief Financial Officer Taco Titulaer told Reuters, "collectively, we have underestimated how big the supply chain issues, and especially for semiconductor shortages, have been or have become."

Some other carmakers, such as Toyota, are hoping to restart production in December with new shipments from pandemic-hit suppliers. Toyota officials told Reuters that the company plans to build an extra 97,000 vehicles between December and March. They will do so by possibly adding weekend work periods.

TSMC and Taiwan have become central to efforts aimed at fixing the worldwide chip shortage, which has also hit manufacturers of smartphones, laptop computers and home machinery.

Hai Do adapted the story for Learning English based on reporting from Reuters. Ashley Thompson was the editor.

cheap - adj. not costing a lot of money

inflation - n. a continual increase in the price of goods and services

gallon - n. a unit of liquid measurement equal to 3.8 liters