Could Half of Oklahoma End Up Under Native American Control?

Update Required To play the media you will need to either update your browser to a recent version or update your Flash plugin.
By Susan Shand
26 December, 2018


In 1999, Patrick Dwayne Murphy, a member of the Muscogee (Creek) Nation (MCN), attacked another member of the tribe on the MCN reservation in Oklahoma.

A state court found Murphy guilty of murder and sentenced him to death in 2000. 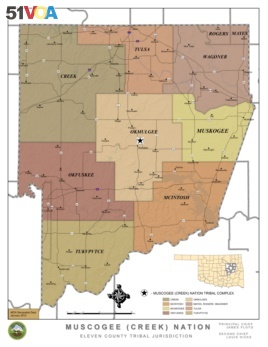 This map, prepared by the Muscogee (Creek) Nation's geospacial department, shows the extent of the tribe's jurisdiction, as per a 2017 federal court ruling now being challenged in the U.S. Supreme Court.

Since then, he has attempted to appeal the ruling. He claims that because the crime took place on Indian land and the victim was Native American, the state of Oklahoma did not have the right to try him.

In the United States, the federal government has legal jurisdiction over murders carried out by Native Americans on lands in "Indian Country."

This meant that Murphy could have a new trial in a federal court, with the tribal court sharing jurisdiction. In federal court, he would likely escape execution because federal law gives tribes the right to decide if they want to execute criminals. MCN rejected the death penalty.

But that was not the end of the case. In fact, it became stranger.

The MCN reservation covers nearly two million hectares of land and 11 Oklahoma counties, with a total population of about 950,000. Recognizing MCN's jurisdiction meant all this land was legally "Indian Country." And that, in turn, meant that MCN had civil and criminal jurisdiction over nearly half the state of Oklahoma.

Oklahoma has taken the case to the U.S. Supreme Court. The state argues that MCN stopped existing in 1907 when Congress created the state. MCN says the land is theirs, as established by an 1866 treaty.

But there is a problem with Oklahoma's argument. The law says only Congress has the power to change reservations and it must do so in very clear language. And in the case of the state of Oklahoma, Congress never did it.

Now, the Supreme Court will decide.

In arguments at the court on November 27, Oklahoma's lawyers said if the federal decision that overturned Murphy's sentence is accepted, the results would be like an earthquake.

Tribe members would not have to pay state taxes and could demand tax money from non-Native business owners. MCN could also write its own land use and environmental laws.

Oklahoma also worries that hundreds of jailed Native Americans who were tried in the state system would have to be retried in federal courts.

Oklahoma is one of the nation's biggest producers of oil and natural gas, and the energy industry is worried about the case. The Oklahoma Independent Petroleum Association (OIPA) prepared a friend of the court briefing. It noted that if the federal decision is not overturned, the tribe could rightly take possession of oil and natural gas wells that sit on its land.

Robert Miller says the association's concerns are exaggerated. Miller is a member of the Eastern Shawnee tribe in Oklahoma and a professor at Arizona State University's Sandra Day O'Connor College of Law.

"The struggle between governments is over money and power, and power means jurisdiction," he said. "Oklahoma can still control its non-Native citizens. It just doesn't want to lose environmental control or civil and criminal jurisdiction over the Indians."

During spoken arguments, justices questioned the state's lawyers about their concerns and about the possible effects of letting the decision stand.

"Yes, there will be turmoil," said Miller. He believes the Supreme Court should not consider the effects on real life.

"The Court is supposed to decide the case based only on the law," he said. He talked about the important 1954 court case that ended racial separation in U.S. public schools. That decision led to riots, violence and even murders in the American south.

"Should the Supreme Court, then, knowing what would happen, not have (made) that ruling?" Miller asked.

reservation – n. a piece of land that is kept as a place for Native Americans to live

jurisdiction – n. the power or right to govern an area

turmoil – n. a state of unrest or disorder