130 Countries Back Deal on Global Minimum Tax for Large Companies

Update Required To play the media you will need to either update your browser to a recent version or update your Flash plugin.
By Gregory Stachel
07 July 2021


Some 130 countries have agreed on a worldwide minimum tax, an idea backed by President Joe Biden. The minimum tax is part of an international effort to keep multinational companies from avoiding taxes by moving their profits to countries with low rates.

The agreement was announced last Thursday. It is an attempt to meet the difficulties of the interconnected and increasingly online world economy.

The deal calls for a world minimum tax of at least 15 percent. This is important for Biden as he seeks to raise more money for his American Jobs Plan. Technical details still need to be worked out. It would be at least 2023 before the agreement takes effect.

The agreement was announced by the Paris-based Organization for Economic Cooperation and Development. The agreement includes taxing part of the profits of the largest international companies in countries where they do business online, but may have no physical presence.

In one-on-one agreements, countries led by France have already started enforcing online taxes aimed at U.S. technology companies like Amazon, Google and Facebook. The U.S. considers this unfair trade practice. Under the new deal, other nations would agree to withdraw those taxes in favor of the international minimum tax. 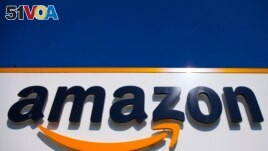 In this April 16, 2020, file photo, the Amazon logo is shown in Douai, northern France. The deal, proposed by President Biden, aims to collect taxes from international companies like Amazon that use online business to avoid taxes since they may not have an actual physical presence. Large international companies like Amazon also move profits to tax havens. (AP Photo/Michel Spingler, File)

"Online giants must pay their fair share of taxes where they have activities," Biden said. "There is no reason a small or medium business should pay more taxes than an online giant simply because it's physically present in the country where it carries out its activities."

Yellen said in a statement that for tens of years the United States has been in a "self-defeating" international tax competition. She said the U.S. lowers its corporate tax rate "only to watch other nations lower theirs in response." She said it has become a race to the bottom.

Manal Corwin is a tax specialist at professional services firm KPMG, and a former Treasury Department official. She said the deal was largely complete and the agreement remained similar to the U.S. proposal. She said it was important for countries to remove their online tax agreements.

Under the deal, countries could tax their companies' foreign earnings up to 15 percent if they go untaxed through reductions in other countries. This removes the reason to move profits since they will be taxed at home. The Organization for Economic Co-operation and Development says such tax avoidance practices cost countries between $100 billion and $240 billion each year.

Not all of the 139 countries that joined the talks signed on to the deal. Ireland's Finance Minister Paschal Donohoe said it had overall support for the agreement, but could not agree to the 15 percent minimum. He said the country's 12.5 percent rate is a "fair rate." Ireland said it would continue with discussions going forward.

More discussion is expected by the world's largest 20 economies, known as the G-20. Finance ministers of the G-20 meet next week in Venice. A convention will be needed for countries to sign a multilateral agreement, although the minimum corporate tax could be passed by each country through their national legislation voluntarily.

Tax experts say that the voluntary method could work if it was passed by countries that have many multinational companies' headquarters, such as the U.S. and Europe. It would send the message that profits made anywhere will be taxed at home up to the minimum.

In the U.S., Biden has proposed a 21 percent minimum rate on overseas earnings of big American companies to stop them from moving profits. Biden's U.S. tax plan must first pass Congress where the Democrats have a small majority.

David McHugh reported this story for The Associated Press. Gregory Stachel adapted it for VOA Learning English. Susan Shand was the editor.

minimum – adj. least or lowest possible in amount or degree

giant – n. a person or thing that is very large, powerful, or successful

medium – adj. in the middle of a range of possible sizes or amounts

response - n. something that is said or written as a reply to something

tax haven – n. a place where people go to live and companies go to operate in order to avoid paying high taxes