Countries Struggle to Decide When to Return to Work

Update Required To play the media you will need to either update your browser to a recent version or update your Flash plugin.
By Hai Do
13 April 2020


Governments around the world are struggling to decide when people can return to work. The coronavirus pandemic has closed businesses and factories and damaged economies.

Workers in some nonessential businesses returned to their jobs Monday in Spain. South Korean officials, however, are warning that new infections could appear if restrictions are lifted. And officials in the United States are debating when businesses can reopen in the world's biggest economy.

The decisions are difficult to make, especially on a national level. Some areas are hit harder and at different times than others.

Britain, Japan, parts of the United States and other places are still seeing daily increases of deaths or infections. Both Italy and Spain have seen drops in recent days. 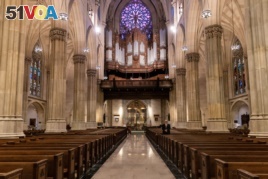 Empty seats are seen during an Easter service at St. Patrick's Cathedral as the outbreak of the coronavirus disease (COVID-19) continues in the Manhattan borough of New York City, New York, U.S., April 12, 2020. (REUTERS/Jeenah Moon)

The U.S. has more confirmed cases and deaths than any other nation. On Monday, Johns Hopkins University's Coronavirus Resource Center reported that the country had more than 558,000 infections and more than 22,000 deaths.

President Donald Trump has said repeatedly that he wants to reopen the economy as soon as possible. On Monday, the president said it was his decision when to reopen the U.S. economy, and not the decision of state leaders.

Trump wrote on Twitter, "It is the decision of the President, and for many good reasons. With that being said, the Administration and I are working closely with the Governors, and this will continue. A decision by me, in conjunction with the Governors and input from others, will be made shortly!"

The governors of Maryland and New Jersey said earlier on Sunday that they are not likely to reopen their states until widespread testing is available.

Maryland Governor Larry Hogan said, "The question is how fast we can get enough tests up to speed in order to help us get to the point where we are able to do all of those things."

New Jersey Governor Phil Murphy warned "if we open up too early, and we have not sufficiently made that health recovery and cracked the back of this virus, we could be pouring gasoline on the fire."

Dr. Anthony Fauci is the nation's head of infectious diseases. He said Sunday that the economy in parts of the U.S. could reopen as early as next month, if health officials can quickly identify and isolate people infected with the virus.

While federal health officials have issued guidelines -- including social distancing and wearing face coverings -- the state governments have issued orders to close schools, services and businesses.

Spanish Prime Minister Pedro Sánchez said the coronavirus crisis "threatens to destroy lives and at the same time destroy the economic and social fabric of our country."

Spain's government is permitting workers to return to some manufacturing and building jobs. Stores and services remain closed. Office workers are urged to keep working from home. The nationwide state of emergency, set to continue for at least two more weeks, prevents people from leaving home for anything other than food and medicine.

In South Korea, officials were discussing whether to permit "certain levels of economic and social activity."

With unemployment numbers rising sharply in the country, President Moon Jae-in promised Monday to focus on saving jobs and protecting the economy. But the country's health minister, Kim Gang-lip, said a quick return to usual activities was "virtually impossible" because of the threat of new infections.

In neighboring Japan, infections have risen as companies have been slow to urge employees to work from home. Many workers are still going into work, even with the state of emergency in many areas -- including Tokyo.

Prime Minister Shinzo Abe has tried to urge people to stay home. He released a video showing himself holding a dog, reading a book and using a remote control at home. But the attempt drew criticism on social media.

German Chancellor Angela Merkel has urged a careful method of loosening restrictions. She will hold a video conference with state leaders Wednesday to discuss a "road map" to return to normality.

Armin Laschet, governor of North Rhine-Westphalia, said his government has a plan for slowly easing the restrictions. The restrictions, which began on March 22, limit public gatherings to only two people.

What about poor economies?

Last week, Oxfam warned that the coronavirus pandemic could push half a billion people into poverty. The charity organization asked richer nations to give at least $2.5 trillion to help.

It said, "Unless developing countries are also able to fight... the crisis will continue and it will inflict even greater harm on all countries, rich and poor."

Hai Do adapted this story for Learning English based on Associated Press and Reuters news reports. Ashley Thompson was the editor.

governor - n. a person who is the leader of a state, province, etc.

gasoline - n. a liquid made from petroleum and used as a fuel

isolate - v. to put or keep someone in place that is away from others

fabric - n. the basic structure of something

focus - v. to direct or keep attention on something

inflict - v. to cause harm