Update Required To play the media you will need to either update your browser to a recent version or update your Flash plugin.
By VOA
05 September, 2015


American country music lyrics often describe women as they might appear in men's dreams. This is especially true of songs by many male artists. But the songs by Maddie Marlow and Tae Dye are different. The two women perform as a duo called Maddie & Tae.

The two released their first music album last month. But they first gained recognition in the country music industry a year ago. That was when they released a song that made fun of the male-heavy lyrics in what has been called "bro-country" music.

The lyrics of "Girl in a Country Song" express how Maddie & Tae felt about the influence of "bro-country" music. They say the words often describe women as objects, not real people. 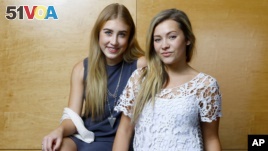 Their song reached the No. 1 position on the "Billboard" Country music charts late last year. It was the first debut song by a female duo to reach that place since 2006.

Maddie Marlow says the song was a message. But she adds that she and Tae Dye never thought it would become so popular.

"‘Girl in a Country Song' was a message that we had to say. We never thought it was gonna the light of day, but it did and it connected so well. But with ‘Girl in a Country Song' production-wise, we had to keep up with the guys that we were poking fun at, the trend we were poking fun at. And so that's why there's those really slamming electrics, but there is still fiddle and steel in there, too."

The two women grew up in the south central United States. They say that another country group, the Dixie Chicks, have influenced their music and songwriting. They want to combine bluegrass music, close harmonies, and a string-band base. But Tae Dye says the duo felt pressured to release another song as successful as their first.

"We felt a lot of pressure to live up to the first song -- a lot of these expectations that were on our shoulders. We would spend the two hours we had off on the radio tour, when we should have been resting and taking care of our bodies, we would write and write, like a slamming up-tempo, to maybe be the second single. We were just trying to be machines, to put out something that would live up to the first single, and then finally we were like, ‘let's stop lying to ourselves and let's put out something that we believe in.'"

That second single turned out to be "Fly." It is a hopeful song about taking risks. It includes a nice mix of pleasing harmonies and acoustical instruments. Maddie Marlow says she and Tae Dye are happy with the choices they have made in their career.

"Of course, there's pressure where if you don't have this slamming up-tempo that has a little rap thing in it then it's not going to make it on country radio. But the trick for us and we've made such good relationships at radio, with all of our friends there is because we've stayed true to who we are. We are saying something and we are not backing down. This is the message. This is what we want to say."

Maddie & Tae are currently traveling across the country with Dierks Bentley on the Sounds of Summer Tour. Tae Dye says that even if their songs make fun of male-dominated lyrics, men still respect their musical abilities.

"Yeah, we are pretty new to the scene and yeah, we are females, but I feel like we can live up to the expectations. We can hang with the guys. We are on tour with Dierks Bentley, Kip Moore, and Canaan Smith. We rock out the night just as they do. So it's kind cool to hang with the boys, keep up with them, and show them that we can do anything they can."

Maddie & Tae will continue performing with Dierks Bentley until late September. They have their own tour planned through November.

VOA's David Byrd reported this story from Washington. Jonathan Evans adapted it for Learning English. George Grow was the editor.

lyrics – n. the words that make up a song

duo – n. two people who perform together, are usually seen together, or are associated with each other

harmony – n. the combination of different musical notes played or sung at the same time to produce a pleasing sound

single – n. one song from a recording that includes many songs