Update Required To play the media you will need to either update your browser to a recent version or update your Flash plugin.
By Dan Novak and Faith Pirlo
03 January 2023


What is the connection between Taylor Swift's songwriting and poems written by William Shakespeare? How does 19th century German philosopher Friedrich Nietzsche relate to Lana Del Rey's music? How do cultural attitudes toward the singers project modern feminist ideas?

These are just some of the questions students explored while taking a course about one of the world-famous pop stars at the University of Texas-Austin or New York University (NYU). The classes are not just easy listening. They closely examine the singers' lyrics, influences, ideas, and place in American pop culture. 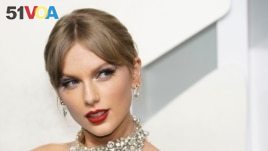 "I said to the students — this is not to make you a Lana Del Rey fan," Iandoli told VOA. "And we're not going to sit here and just have Lana Del Rey playlists and just kind of hang out every week together."

But listening to the music was a big part of the class. And since it is taught within NYU's Clive Institute of Recorded Music, students were able to listen to Del Rey's music in a special classroom with good sound quality. That way, they could hear all the details the music had to offer.

Iandoli says the course is a combination of music criticism, music business and social commentary. And the course can get into some pretty complex subject matter.

Del Rey, whose music often deals with mental health and complex relationships, is considered a pioneer of so-called "Sad Girl Pop." This has connections to the feminist "Sad Girl Theory." Iandoli said the theory expresses the idea that women use sadness as a tool of empowerment and resistance. Female songwriters of the past might be sad because a lover left them. But Del Rey and other "Sad Girl Pop" singers are sad for another reason: they were the ones who left their lover.

"The sadness of today... is almost empowering because if you're the one breaking the heart, you're in control of the heartache," Iandoli explained.

To learn about this idea, students read essays by feminist thinkers, watched films and discussed the ideas in class.

"I like to assign things rooted in history," Iandoli said.

The class on Taylor Swift at the University of Texas is all about connecting past and present. English professor of medieval literature Elizabeth Scala teaches the course. She wanted to find a way to get her first-year students interested in reading older writings and research methods.

In the course, called "The Taylor Swift Songbook," Scala centers on Swift's songs as poetry.

"I started with treating Taylor Swift as kind of a poet and dealing with her lyrics as poetry," she said. "And then I would often pair (the songs) with ... a Renaissance love poet."

Scala said the course is designed to help students realize that poetry is a part of their everyday lives when they listen to music like Swift's. For example, students might see a connection between the popular music of today and writers like Shakespeare and Robert Frost. Through Swift's music, students learn poetry methods and structure. Scala noted that while students listen to poetry all the time in music, they may not recognize what it is.

"You're carrying it around in your pocket on your iPhone all the time and you're constantly listening to it," Scala said. She added that while music lyrics often rhyme, modern poetry often does not.

The professor also pairs Swift's songs with other readings, films, and plays, like Shakespeare's Romeo and Juliette.

One song the students closely examined was Love Story from Swift's Fearless album. The song describes scenes from Romeo and Juliette. Students discuss Swift as a "Juliette" character in the song. Scala explains that Swift creates a fairy tale structure, but unlike the play, Swift as Juliette is very active. Scala says using the song helps ease the students into reading the first three parts of the play.

Both classes explored the larger music industry surrounding the two artists, including the issue of how much control a writer has over their work. Iandoli assigned readings on pop music and female pop music branding.

On the final day of class at Texas, one of Swift's early co-writers came to speak to the students. At NYU, Iandoli invited the representative who signed Del Rey to Interscope Records as a guest speaker.

Iandoli said Del Rey is a great singer to study because she has influenced a new generation of female singers and songwriters.

"There is something very great about the music that she makes because she tapped into the human emotion and she spoke to these girls. And these girls later picked up guitars and pianos."

Scala noted that Swift's songs help students see how difficult, older poetry is not much different from poetry used in today's popular music.

"The way that you listen to and understand these songs is deeply embedded in the way in which poetry has worked for a thousand years," she said.

attitude – n. a feeling or opinion about something or someone

hang out – phrasal verb. to be or stay somewhere for a period of time without doing much

rhyme – n. one of two or more words or phrases that end in the same sounds

branding – n. the process of establishing the popular image of a specific product

embed – v. to place or set (something) firmly in something else