Update Required To play the media you will need to either update your browser to a recent version or update your Flash plugin.
By Caty Weaver
09 March, 2016


An American court has ordered several defendants to pay a woman $55 million in damages connected to an online video.

Erin Andrews is a broadcaster of sports news. She was secretly videotaped without any clothes on at a hotel in Nashville, Tennessee in 2008. The video was posted on the Internet the next year.

A man, Michael David Barrett, was found guilty of stalking in connection with the act. A court sentenced him to 30 months in prison in 2010. However, the video continued to circulate online. 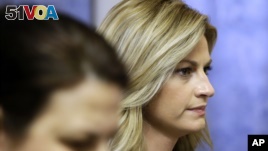 In 2015, Andrews took legal action against Nashville Marriott hotel, its partners and Barrett. She sought $75 million from the defendants.

Her lawyers said Marriott employees had informed Barrett that Andrews was staying at the hotel. They said he asked to have the room next to Andrews. Employees gave him that room.

He shot the video through a hole he made in a door that connected to her room. He said he released the video online for money.

Andrews' lawyers said the hotel should have told her of Barrett's request. They said Marriott should not have placed the man in the room next to her.

Andrews testified during the two-week trial. She said she felt "so ashamed" that the video of her naked was on the Internet.

Erin Andrews is expected to receive far less than the $55 awarded by the Tennessee court. Barrett is responsible for half the amount, which he does not have. The hotel and partners will appeal the amount and almost certainly be able to settle for lower damages.

Some experts have estimated that Andrews will end up with no more than six million dollars.

Caty Weaver wrote this story for Learning English based on a VOA news report. Kathleen Struck was the editor.

Do you think the Tennessee court decision was fair? We want to know! Post your thoughts in the comment section or on 51VOA.COM.

stalk – v. to follow, watch or cause problems for a person in a way that is frightening and sometimes dangerous

circulate – v. to go or spread from one person or place to another

testify – v. to talk and answer questions about something, especially in a court of law

naked – adj. not wearing any clothes: not covered by clothing