Update Required To play the media you will need to either update your browser to a recent version or update your Flash plugin.
By Jonathan Evans
28 April 2020


The new coronavirus outbreak has brought attention to a little-known creature – the pangolin.

In a recent report, the U.N. Office on Drugs and Crime (UNODC) says the animal is "among the leading suspects" that imported COVID-19 from wild bats to people. The agency follows illegal wildlife activity.

Pangolins are the size of a small cat to a large dog. Conservation organizations say they are the most heavily illegally traded wild animal in the world. The animals are hunted in Asia and countries near the Sahara Desert in Africa. They are bought and sold illegally, mainly to East Asia for their scales and meat. The scales are made of keratin, which is also found in human hair and nails. 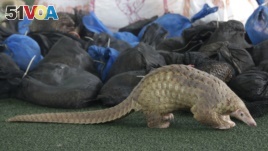 FILE - A Thai customs official displays some of the 136 pangolins and 992 pounds of pangolin scales it seized during a press conference at the Customs Department in Bangkok, Thailand, Aug. 31, 2017.

"One operation last April seized 25 tons of African pangolin scales — representing an estimated 50,000 dead pangolins — with a market value of some $7 million," UNODC Executive Director Ghada Waly said. "Between 2014 and 2018, the equivalent of 370,000 pangolins were seized globally."

There are eight species of pangolins. Their tongues can be longer than their bodies. Four species are native to Asia and the other four to Africa. All were placed on the Convention on International Trade in Endangered Species of Wild Fauna and Flora's protected list in 2016. It is not known how many African pangolins are left in the wild.

The U.N. found that as Asian supplies of pangolins decreased from overhunting, illegal traders have turned to Africa to fill demand. Starting in 2013, West and Central African nations including Nigeria and Cameroon, were major suppliers of pangolin scales and meat. More recently, Ivory Coast, Guinea and Liberia have become involved in the illegal trade.

The UNODC reported that hunters can earn from $8 to $13 for a small live pangolin and $25 to $30 for a large one. In Uganda, hunters reported catching as many as 20 per day.

Once caught, pangolins are placed in hot water or fire to remove their valuable scales. Depending on their size, a pangolin can have up to 1,000 scales. They are dried in the sun and later ground into a powder. That powder is used in Chinese medicine to make a paste believed to help a woman produce breast milk and help with blood flow, among other cures. Pangolin meat is also valued and used in some Asian cooking.

Scientists are still looking for the exact source of the current coronavirus outbreak. But conservationists hope that the association with the coronavirus will help to end demand for the endangered pangolin.

Margaret Besheer reported on this story for VOA News. Jonathan Evans adapted it for Learning English. Hai Do was the editor.

paste – n. a soft, wet mixture of usually a powder and a liquid

powder – n. a dry substance made up of very tiny pieces of something

scales – n. the small stiff plates that cover much of the body of some animals such as fish and snakes